Israel Sport Events – Be Still My Pumped Up Heart

Some of the best motivation videos urge you to run when you can, walk if you have to, crawl if you must; just never give up. In Israel, there are so many ways to keep moving, get healthy and get that heart rate up, that running, cycling and swimming are permanent fixtures on the social and cultural landscape. A fabulous run through UNESCO City
One of the largest sporting events in the calendar is the Tel Aviv Marathon. Open to professional and hobbyist runners, tens of thousands of runners will be pounding the sidewalk on February 22 after the event was brought back in 2009. Since then, one Israeli man – Avraham Hailemelkot (2010) and one Israeli woman – Orna Blau (2009 and 2010) have won the race, which has typically been dominated by Kenyans and Ethiopians. First inaugurated back in 1981, today, the event attracts over 40,000 runners choosing to enter the marathon, the half marathon, the 10km or 5km races as they enjoy a stunning flat run along the Mediterranean Sea, through some of Tel Aviv’s most picturesque points and passing close to many of the city’s major landmarks, including the Dan Tel Aviv and Dan Panorama Tel Aviv. A few days before, there is a mini Marathon for Children, carried out by the legendary character, SpongeBob, in the late afternoon of February 20, with a variety of activities for families at Sarona Market, not far from the Link Hotel & Hub. 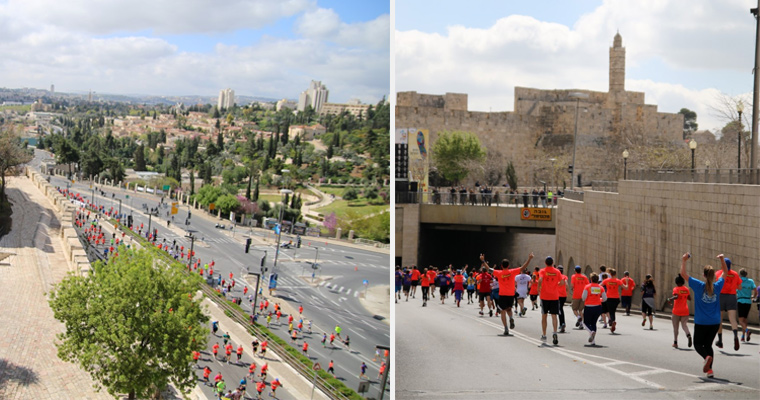 Jerusalem Marathon in the Old City that passes two of the Dan Hotels in the city. Credit: Riki Rachman &  Jerusalem Development Authority

The Holiest Marathon in the World
Arguably the holiest, and hilliest, marathon in the world is the Jerusalem Marathon for those wishing to combine modern Nike running shoes with steps through ancient history. Since it was founded in 2011, when the marathon attracted 10,000 participants from 40 countries, this annual event has regularly expanded to 25,000 runners of many ethnicities and nationalities. Taking place this year on March 15, the 42.2 km route (26.2 miles) route
combines physical endurance with exquisite landscapes, fresh mountain air and unique culture and heritage sites such as the Israeli Knesset, Mahane Yehuda market, David’s Tower, and much more. Starting from the Israeli Knesset, the route passes through Mount Scopus and the Old City, a hop, skip and a jump from the King David Jerusalem and Dan Panorama Jerusalem, and finishes at the city’s Sacher Park. There is also a half-marathon, 10km, 5km, 1.7km Family Race and 800m Community Race to cater for different levels of interest and fitness.

If Jerusalem’s marathon is one of the loftiest runs, the Tiberias Marathon is the lowest course in the world. The road race held along the Sea of Galilee, 200m below sea level, was won in January by Israeli mother of five, Beatie Deutsch, and Ethiopian, Aimro Alamia.

Life on Two Wheels
If you prefer to swap two feet for two wheels, then there are few places where biking is as popular as Israel. While a German Baron is credited with inventing the first ever bicycle (without pedals) in the early 19th century, and a Scottish blacksmith is believed to have created the first bike with pedals in the 1830s, Israelis have taken cycling to a whole new level. With locals travelling to work on hoverboards and attending meetings via Segway, electric bikes and scooters are everywhere. Last August, two U.S. companies, Bird, an electric scooter sharing company, entered the Israeli market, followed, shortly after, by new rival Lime, both competing with other companies, Israeli-designed Inokim and China’s Mobike. There is, of course, the municipality-sponsored Tel-O-Fun scheme in operation, offering locals and tourists the chance to rent bikes across the city. Pick up a bike near Gordon Beach in front of the Dan Tel Aviv and cycle down the promenade to glorious Jaffa or if you prefer a more challenging bike tour, Dan Active has been taking tourists on week-long cycling adventures since 2017, showcasing breathtaking scenery, fascinating history, iconic sites, bringing guests the relaxation, comfort and luxury for which the Dan Hotels is renowned. A joint venture between Dan Hotels and Gordon Active, Dan Active Vacations takes care of all your needs, planning riding options to suit your age or skill so that you can enjoy an extraordinary journey. If this all sounds a little too exhausting, there are times when you just need a swimming pool. Whether for exercise or relaxing, little compares to a dip into the calm waters of a pool. Both heated indoor or sun-soaked outdoor pools are in abundance. There is a revamped open and heated swimming pool, part of the modern refurbishment at the luxurious Dan Carmel in Haifa. In the meantime, it is a pleasant surprise to find a 24-hour heated indoor swimming pool – Jimmy’s Pool – with eight swimming lanes on the rooftop of Tel Aviv’s bustling Dizengoff Center. Next to the sea, between Ben Gurion Street and Hilton Beach, is the iconic Gordon Pool, one of the oldest outdoor swimming pools in Israel having opened in Tel Aviv in 1956. Here, you can enjoy a refreshing swim in the Olympic-size pool, while the kids revel in the children’s and toddlers’ pool, all with a tranquil view of palm trees and the Tel Aviv Marina, close-by to the Dan Tel Aviv. In fact, talking of indoor pools, Dan Tel Aviv are have one of the largest indoor pools to be found in the city.