The sunshine may dim in Israel during December, but the lights keep on burning, long into the winter, as the magical festival of Hanukkah illuminates the country. This fixture in the Jewish calendar is a firm favorite among many, and a wonderful time to visit and enjoy Israel, take in the candle lighting ceremonies, enjoy live entertainment, and taste the heart of the festival – its iconic symbol – the donut. 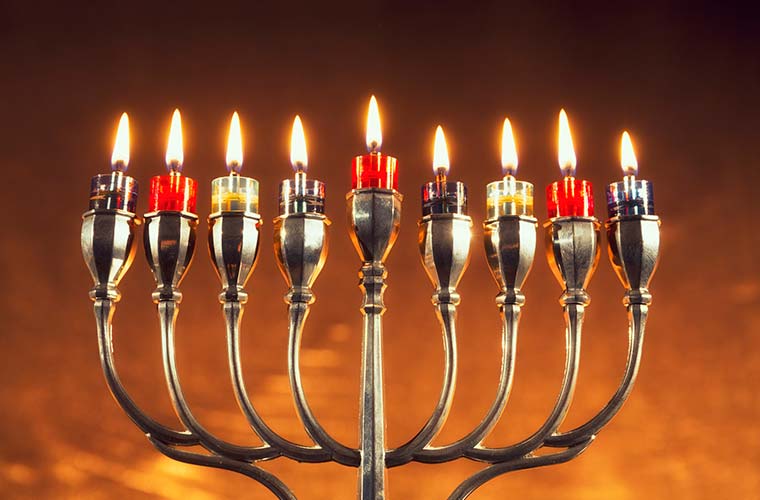 The Miracle of the Oil
What does a sugary fried ball of dough have to do with Hanukkah? According to the story, over 2,500 years ago, Syrian king Antiochus forbid Jews from practicing their religion, and they in return refused to worship the Greek gods he encouraged. This sparked a rebellion by a small group of Jews, called the Maccabees, and after a three-year war, they took back, repaired and rededicated the destroyed Holy Temple in Jerusalem. They did this by lighting the lamp (menorah). However, only a small flask of oil was found, enough for just one day, but, miraculously, this oil burned bright in the temple for eight days. 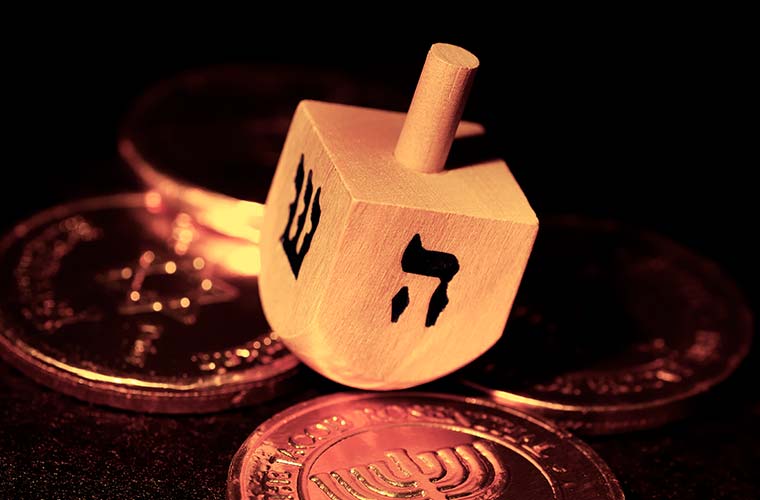 Hanukkah – the colorful Festival of Lights
From this miracle began the tradition of lighting the candelabrum (called the menorah or hanukkiyot), and on each of the festival’s eight nights, an additional candle is lit. Children try to win chocolate coins, playing with small spinning tops called dreidels. Furthermore, to celebrate the miracle of the oil lasting for eight nights, food that is fried in oil is eaten, and none more so than the sufganiyah, a deep-fried jelly donut topped with powdered sugar. 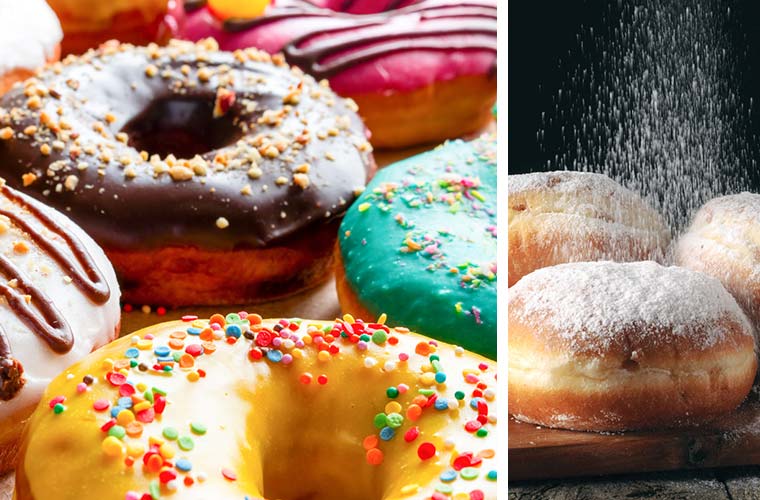 Visitors are amazed by the sheer variety of donuts with fillings that include strawberry, dulce de leche or Nutella, while donut-lovers also enjoy the well-known sfenj, a Moroccan fritter cooked in oil, sprinkled with sugar and soaked in honey.

Here, we take a look at some of the country’s best bakeries that dish up these most delicious treats, so delicious that it is estimated that Israelis eat more than 24 million donuts every Hanukkah! And, there are so many to choose from.

Tel Aviv glows in the Hanukkah candlelight
Nowhere is this more visible than the country’s largest bakery chain. Founded 30 years ago, Roladin today has more than 60 branches across Israel and has consistently come up with some of the most mouthwatering and award-winning Hanukkah donuts around. Try the wide selection of flavors, including the delicious mascarpone and red berries, the pineapple cream donut topped with white chocolate, and YOLO Gold, a succulent combination of chocolate, hazelnut and pralines! Many of Roladin’s donuts are accompanied with a mini syringe, containing coffee, chocolate or liquor for you to squeeze into the center, for more sticky goodness. Lines also form around the block in the Tel Aviv branches of Lehamim Bakery, a healthy walk back to the Dan Tel Aviv and Dan Panorama. 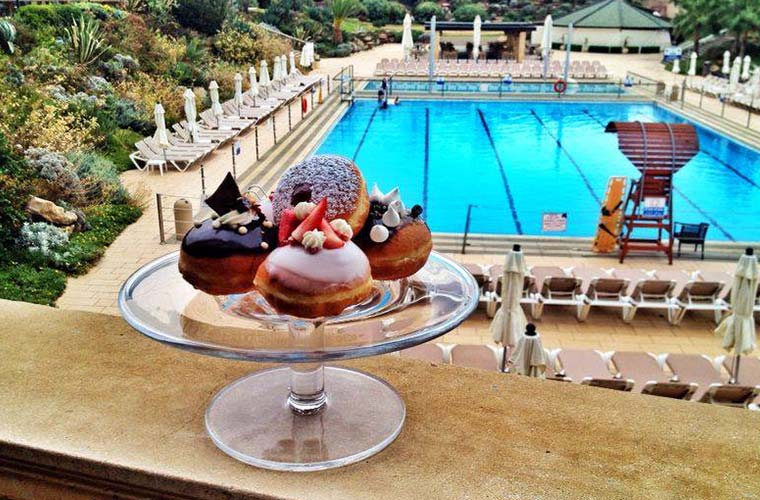 With branches at the Tel Aviv Port, Carmel and Sarona markets, Lehamim upholds the very traditions of Hanukkah, brings you the highest quality and simplest flavors. Whether your preference is for chocolate or caramel, strawberry or marzipan, this old school bakery offers donuts to savor. Brimming with its European influence is Boutique Central. The warm and inviting bakery has been providing a modern and authentic menu since it opened in 2004. Its batch of lightly fried jelly or chocolate donuts enjoy a gentle dusting of sugar and will have you licking your lips on the way to the delightful candle lighting ceremony in Tel Aviv’s main square, Kikar Rabin. 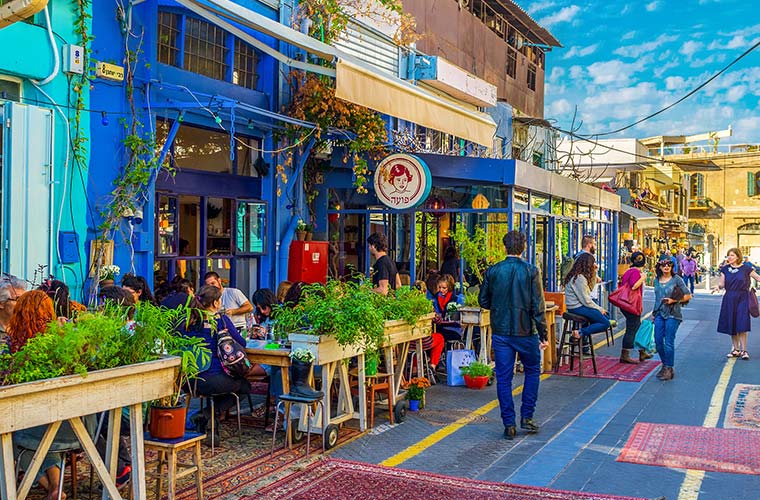 Hanukkah in Jerusalem is enchanting
While Tel Aviv during this time of year is magical, celebrating and witnessing Hanukkah in Jerusalem is utterly enchanting. In close proximity to Jerusalem’s four Dan Hotels is the phenomenal spectacle that is the At the WWestern Wall. Here, tourists and locals mix t, tourists and locals mix too watch the menorah being lit every night of the festival, while the decorative menorahs on display in locals’ windows and the smell of freshly baked sufganiyot hit all the senses. One bakery that, for us, checks all the boxes is the institution that is Marzipan Bakery, by the city’s lively Mahane Yehuda market. Renowned arguably for the best rugelach in Israel, this jewel in Jerusalem’s culinary crown also offers a fantastic assortment of sugar-coated jelly and chocolate donuts, specially made for Hanukkah. Equally favored among locals is Café Kadosh, where owners Izik and Keren Kadosh have constantly built on their creative flair with an impressive menu of breakfasts and pastries. The eclectic choice of Hanukkah donuts scores highly with their sweet toothed fans, who enjoy both the traditional variety, as well as donuts filled with nougat, pistachio or dulce de leche. Scrumptious pastries and donuts are available at Gagou De Paris, a landmark on the Jerusalem scene where it taps into its French style and heritage to serve up a delightful mix of festive donuts. 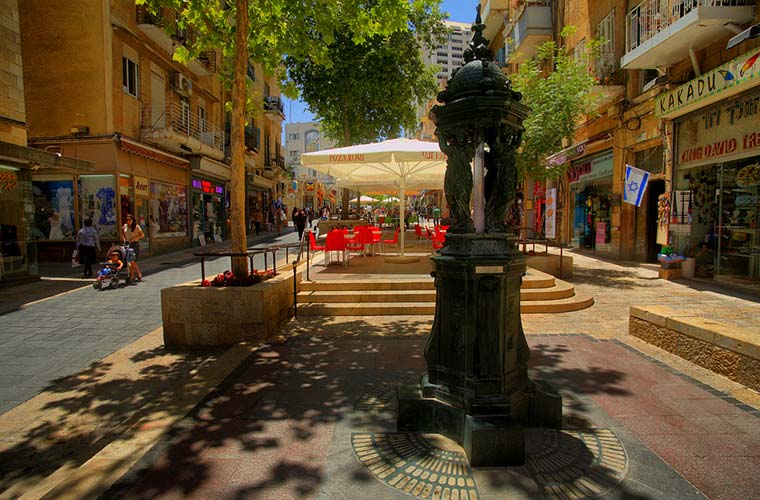 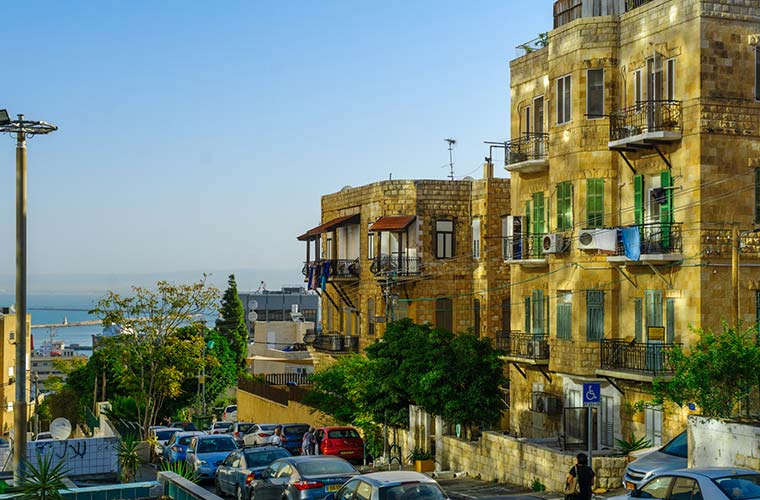 With homes and businesses across Israel reveling in the festivities during this time of year, visitors quickly learn that Hanukkah is not so much a festival as it is a feeling. And that is a miracle, all on its own.