The Dan Hotels Chain is happy to welcome three new hotels into its ranks: Two hotels in northern Israel, in Safed and Nazareth, and a third in Eilat.

With this the Dan Hotels chain has completed a significant expansion and now includes 18 hotels nationwide, expanding its geographic reach and appealing to new audiences.

Ruth Safed hotel features charming corners and walking trails that blend into nature and are steeped with the city’s history and culture.

Mary’s Well Nazareth
The Mary’s Well Nazareth Hotel preserves the unique character of the city of Nazareth, where three major religions – Judaism, Christianity and Islam – come together. It is located in the heart of the Old City, amidst the alleys of the colorful and vibrant market, close to the tourist sites and the Church of the Annunciation. The hotel has 226 rooms featuring patio rooms and church rooms with views of the Old City.
The hotel is close to the Orthodox Church of the Annunciation, as well as to monasteries and other sites in the city where it is believed the family of Jesus lived.

The Mary’s Well Nazareth Hotel preserves the unique character of the city of Nazareth. Up Left: Hotel building. Up Right: The Orthodox Church of the Annunciation

Mary’s Well Nazareth Hotel combines an exclusive hospitality experience with a confluence of religions and beliefs and the unique atmosphere that characterizes the city and its tradition of hospitality.
Guests are invited to join a host of tours of the area, become familiar with the fascinating architecture typical of the magical Galilee city and, of course, immerse in the history, colors, smells, and tastes that make Nazareth a vibrant and wonderful international city.

Ruth Safed
High above the views of the Upper Galilee, nestled on the top of Mount Canaan, sits the city of Safed, overlooking one of the greenest and most beautiful areas of Israel. On the edge of the Old City, with its charming streets, lies the Ruth Safed hotel – a heavenly tourist destination for guests visiting all year round.

Hotel grounds span six acres that house 77 rooms steeped in a special and pastoral atmosphere that harmoniously links the past and the present. Half of the structure was built as part of an alley used as a Turkish inn during the time of the Ottoman Empire. The other half of the building is modern, but still retains its authentic character and a seamless link to nature.
The hotel features a swimming pool overlooking the Galilee vista, charming corners and walking trails that blend into nature and are steeped with the city’s history and culture.

A visit to the Ruth Safed Hotel is the point from which to embark on expansive guided tours that lead visitors within minutes to the alleys of the Old City and the centuries-old secrets they hold, as well as to the tombs of sages and rabbis, artist’s booths, and other diverse tourist attractions in and around the city.
Adi Maor, CEO of Dan Hotels in northern Israel:
“The Dan Hotels Chain has made a very significant and important move with the purchase of two hotels in northern Israel, as they are a different product that expands and diversifies the possibilities for both new audiences and our longtime, loyal guests, who seek new experiences and attractions in news sites that offer them the accommodations, service, and reputation of the Dan Hotels Chain.”

The Neptune Eilat hotel is situated on the Red Sea beach and is in close proximity to the city’s attractions.

Neptune Eilat
This is Dan Hotels’ third location in the southern resort city, joining the Dan Eilat and the Dan Panorama Eilat hotels.
The Neptune Eilat hotel is situated on the Red Sea beach and is in close proximity to the city’s attractions as well as the “Mul Hayam” mall.

Guests can choose from 277 spacious rooms with balconies overlooking the Red Sea, as well as enjoy a wide range of facilities and amenities, including adult and children swimming pools, a spa with massage rooms, a sauna, a Jacuzzi, a gym, and much more.
Lior Muchnik, CEO of Dan Hotels in Eilat and general manager of Dan Eilat: “The fact that the Neptune Hotel has teamed with the Dan Hotels brand empowers and expands the chain’s options by reaching out to new and different audiences. The chain intends to invest in the new product and start a process of integrating the Dan Hotels Chain’s standards.” 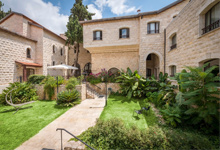