Plenty of Room at the Inn as Dan moves to Nazareth

There may have been “no room at the inn” in Bethlehem, the birthplace of Jesus, but there is plenty of comfortable accommodation in his boyhood town of Nazareth, after Dan Hotels acquired the 226-room hotel in Nazareth , now the Mary’s Well Nazareth Hotel. This was a second addition to the Dan Hotels family – including the Ruth Zefat in the upper Galilee in February.

Dan Hotels’ entry into the stunning Galilee will bring to the region the luxury accommodation for which the now 18-hotel chain is renowned. And, Nazareth is more than ready. The city has come a long way since its days as an agricultural village as early as the Middle Bronze Age, while tombs have been found dating from the Iron Age to Hasmonean times. Back in Roman Times, it was a quiet, rustic Jewish village of around 500, today a city of 60,000, Israel’s largest Arab city, both Muslims and Christians, tending to the many steeples and domes.

This is a city of religion and faith, of spirituality and holiness, but also a city with a rich history, fascinating archeology and Middle Eastern charm, and the Mary’s Well Nazareth Hotel is at the heart of it. Nearby, a bustling local market in the stone-paved Old City is one of the popular attractions and spot to pick up fashionable fabrics, sample taste the spices and local foods, and buy local artwork.

The main attractions transport you back to Nazareth’s ancient past, and the hotel is right at the center of all the main attractions, that have drawn pilgrims and tourists for 2,000 years. According to Christian tradition, the family of Jesus hails from the city of Nazareth, where his mother, Mary received the news of her pregnancy from the angel Gabriel, and where Jesus himself spent most of his life. As such, this ancient city’s rich history and fascinating archeology makes it a popular destination for Christian pilgrims. As the number of visits increased, the city built the first church – the Church of the Annunciation (or Basilica of the Annunciation) – in 1969, on the site of Joseph and Mary’s home and where Mary learned of her pregnancy. This is among the most sacred places in the Christian world.

Next to this church is the Church of Saint Joseph, built on the ruins of agricultural buildings where, according to tradition, Joseph, Mary’s husband, had his carpentry shop. There is also the Greek Orthodox Church of the Archangel Gabriel, which was built over the freshwater spring known as Mary’s Well, a structure from the Crusader period, and the Greek Catholic Synagogue Church (or Greek Orthodox Church of the Annunciation), believed to be the site of the synagogue where the young Jesus was taught. A walk through the narrow streets, between the picturesque houses, and imagine the significance then of this tiny village. The open-air museum, Nazareth Village does exactly that, carefully reconstructing and recreating village life in the Galilee in Jesus’ time. A great program for Easter shows you an original farm, which has been restored with olive trees, terraces, ancient wine press, irrigation system and stone quarry, with exact replicas of first century houses, a synagogue, mikveh and olive presses. Complete your experience with a delightful first century Biblical meal served by villagers in a beautiful setting.

Left: Basilica of the Annunciation – among the most sacred places in the Christian world.  Right:  Church of the Archangel Gabriel – a structure from the Crusader period.

After you have eaten, if you want to see exactly where Mary walked to gather water, take a free guided tour of the Holy Caves of Nazareth, and retrace her steps through a network of tunnels to be excavated.

Exhausted? Get your best night’s sleep at the Mary’s Well Nazareth Hotel before taking the Jesus Trail, a 65 km hiking and pilgrimage route that starts in Nazareth and traces the route Jesus may have walked, connecting many sites from his life and ministry. The route takes in Cana, where Jesus performed the miracle of turning water into wine, the fishing village, Capernaum, and Mount Precipice, which offers an excellent panoramic view of the patchwork Jezreel Valley and Mount Tabor, especially nice at sunrise. 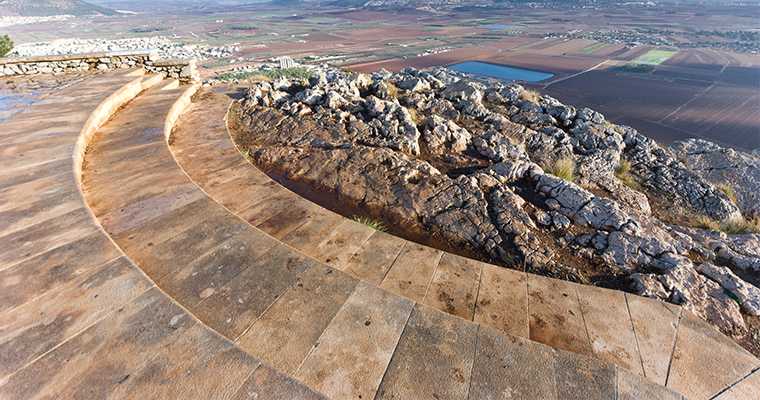 Mount Precipice, which offers an excellent panoramic view of the patchwork Jezreel Valley and Mount Tabor

Dan Hotels is now here in Nazareth. And what a comfortable stay before you explore! 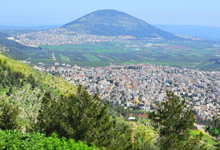 Plenty of Room at the Inn as Dan moves to Nazareth