“Thank you for accepting differences between us,” cried Israel’s Netta Barzilai as she won last year’s Eurovision Song Contest in Lisbon. Just twelve months since her catchy tune Toy landed the top prize, Israel delighted the thousands of visitors for Eurovision week, and hundreds of thousands tuning in from all over the world.

Left: The official logo of Eurovision 2019.  Right: A display model made of toys, as a Netta Barzilai’s character, which was placed at Charles Clore Park by the artist Nirit Levav Packer.

Of course, this wasn’t Israel’s first time hosting the Eurovision; it was home to the 1979 and 1999 contests, and in fact won by Israel four times in the 63-year history of the contest.

But those shows, which had fewer than 25 countries involved, cannot begin to compare to this years show where 41 countries battled it out for this year’s title! The Tel Aviv Fairgrounds’ convention center, or Expo Tel Aviv, played host to the extravaganza, across eight pavilions. The 5,000 square meter Pavilion 1 was the colossal Green Room for Eurovision contestants, with the main event taking place in Pavilion 2 to a 7,000-strong crowd.

Tel Aviv’s Eurovision celebrations was also mentioned at the Jaffa’s Clock Square, which is not far from The Dan Panorama Hotel in Tel Aviv.  Drone Photo credit: Yosi Vaknin

Fans flocked to take pictures and selfies at the opening ceremony’s Orange Carpet in the city’s Habima Square. Located at the top of the tree-lined Rothschild Boulevard, this square contains major cultural institutions such as the Habima National Theatre, the Charles R. Bronfman Auditorium, home of the Israeli Philharmonic Orchestra. On May 12th, crowds were there for different reasons and were not disappointed by the dazzling display of outfits and personalities. The Grand Finale on May 18th, was the main attraction however, when pop icon Madonna performed two songs after the final 26 countries performed for the title, eventually won by Holland.

It was throughout the colorful week that the beachfront hosted the action. The Eurovision Village at Charles Clore Park was the official fan zone right by the unofficial home of Eurovision Israel, Dan Panorama Tel Aviv, which has always been a magnet for visiting stars and fans alike. Masses meandered and mingled in the Euro-Village which was open daily from 5 p.m. Revelers were invited to enjoy live shows and performances by some of Israels top local talent as well as sample the comforting cuisine at many food stalls. There was even a fun basic Hebrew lesson for visitors to learn some of the local lingo.

The Tel Aviv Eat Festival also took place at the same time in a separate and adjacent compound, with visitors able to taste some of the most delicious dishes by Tel Aviv’s celebrated chefs.

The week saw performances by previous Eurovision superstars, such as Austria’s Conchita Wurst and Israel’s Dana International, who became the first transgender woman to win Eurovision in 1998. Three other former Eurovision Song Contest champions, Anne-Marie David (Luxembourg, 1973), Loreen (Euphoria, Sweden, 2012) and Carola Häggkvist (Sweden, 1991) performed a free concert on the boardwalk near the Tel Aviv Port accompanied also by some of Israels top talent, including Mooki. For devoted fans dance parties continued throughout the night and long into the weekend.

A highlight for some of the actual performance was an ensemble of “Halleluyah” the winning song of Eurovision 1979, performed by Gali Atari and many of Israel’s most famous Eurovision personalities. And of course, Netta certainly took the roof off piloting in the flying entrance and many appearances through the night.

With many events and places to hang out in Tel Aviv at the best of times, the EuroCafe was set up for for fans to meet and special Eurovision viewings at the funky and creative Link Hotel & Hub, attracted visitors to hang out at the hotel’s “hub”

These were just a handful of numerous events on an electric week in the city that never sleeps. The Grande final in fact also coincided with Tel Aviv White Night, an annual all-night celebration of the city’s buzzing culture. As the sun set, party people explored the many performances and exhibitions taking place throughout the city; at the Eurovision Village, cultural centers, museums, bars and on the beach boardwalk in front of the rainbow-façade of the Dan Tel Aviv. 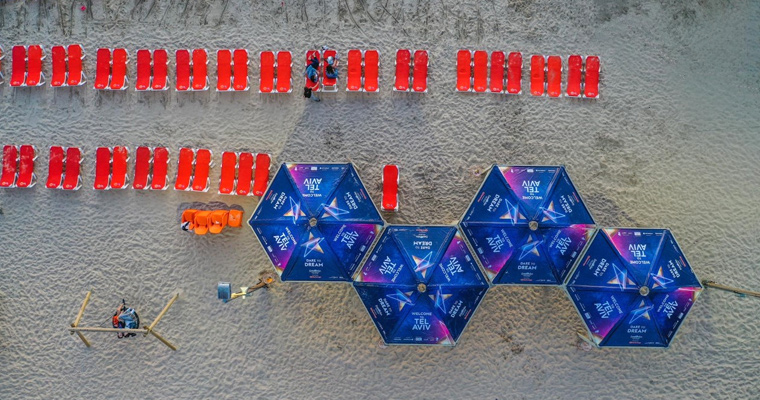 Dan Hotels certainly enjoyed the eclectic guests and stunning vibe that came along with the spirit of such an event, can’t wait till the next time.