Almost a quarter of Israelis drink four to eight cups of coffee each day, above the world average. These were the findings from a survey carried out by the Israeli start-up Sleeprate, which also found that Israelis drink a staggering 3 billion cups of coffee per year. After sipping on an Hafuch Gadol – my first of the day – I hit the streets of Israel to find out where to get the hafuch (a creamier espresso-based latte) and discover the vast range of coffees available. From chains to independents, cafés to micro-roasteries, Israel has it all.

This year, Café Landwer celebrated its 100th anniversary and it the 70c-plus chain has been producing fresh, flavorful and rich coffee since 1919, after bringing the recipe to Israel from Germany and opening their first coffee roasting facility in Allenby Street in Tel Aviv, becoming the first coffee roaster company in Israel. Today, along with fellow chains, Aroma and Arcaffe, they have thrived and prospered in a country, where Starbucks famously failed, closing its six stores and withdrawing from Israel in 2003.

Espresso might not have become a common drink in Israel until the 1990s but the first ever espresso bar has been sitting in the middle of Rothschild Street in Tel Aviv, and is a stopping point on the Independence Trail, a free self-guided walking tour that takes you through iconic moments and past key buildings in the city’s history and country’s independence. There are a string of coffee stopping points in the middle of Rothschild Street, as you head up this tree-lined boulevard towards Habima, Israel’s national theater, close to a vibrant café called We Like You too!, where you can take a bench or blanket and meet with friends for your daily dose of caffeine and some of the best people watching in the city.

In coffee obsessed Tel Aviv, Café Nahat has become one of the city’s flagship coffee houses since it opened its doors in January 2015. Standing out with its own in-house micro-roastery, this uber-chilled café is a hub for bean fanatics and attracts locals and tourists looking to catch up or work over the perfect cup of coffee. “Israeli life is full of adrenaline and social life – coffee and cafés supply both,” said Dan Urieli and Assaf Bilton, co-owners of Café Nahat. Coffee drinkers can sit among the cozy inside tables or outside in front of the famous Dizengoff fountain, sipping on cups of coffee from beans sourced, blended and roasted on the premises. Try coffees from India, Colombia and Ethiopia, with many coffees brewed via a range of brewing methods, from Turkish and Chemex to Hario and cold brew. Be sure to try out its sister coffee shop, Ada Hanina, tucked away in Jaffa’s Flea market and steps away from the Mediterranean Sea and close to the Dan Panorama Tel Aviv. At Ada, you will find a small batch, specialty micro-roaster bringing in green coffee beans from some of the world’s best coffee growers.

And don’t forget to stop by LINK cafe at Link Hotel & Hub, The Link café is open 24/7 and offers: coffee, pastries, sandwiches, soft drinks and more in a grab & go concept. Another option is to have a sit with us and enjoy the fresh air.
The café is conveniently located at the hotel entrance featuring Street-side seating.

“Israelis are developing a taste for the best quality coffee”

This growing trend towards roasted-on-the-premises is also seen over in Jerusalem. Opposite the iconic Mahane Yehuda market is Power Coffeeworks, one of the best kept secrets in the city. South African owner Brandon Treger explained: “Israelis are discovering a stronger appreciation for good quality coffee. I would call this the next wave of appreciation for coffee here. Israelis are travelling more and more, they want to experience other cultures and are developing a taste for the best quality coffee.” 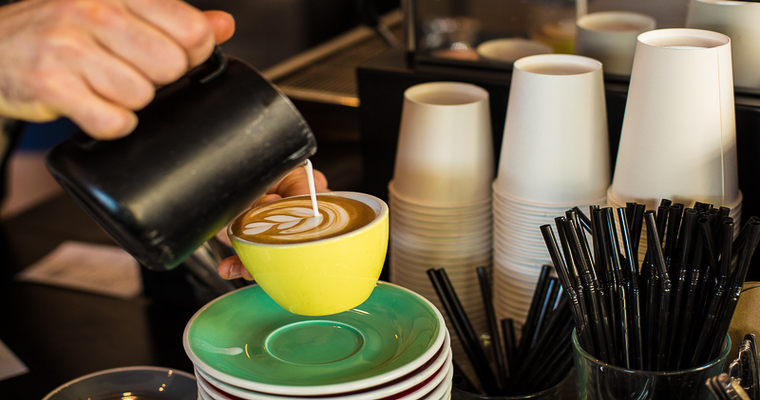 Café Nahat has become one of the city’s flagship coffee houses since it opened its doors in January 2015.

Treger also roasts his own beans on the premises, with beans coming from Papua New Guinea, Tanzania, Brazil, Ethiopia and Colombia, among other places. Serving up delicious espressos and cappuccinos, the friendly vibe makes this one fabulous coffee house with character. A short walk from the King David Jerusalem Hotel is Café Nadi, where you can take the weight off your feet, let your worries evaporate with insanely good cups of coffee, and an ideal breakfast spot to start the day. Close by is also the renowned Etz Café, which combines fresh ingredients, quality coffee, and the homely atmosphere of a family-run business. Freshly roasted at a boutique roaster in Jerusalem, Etz brings you a menu carefully crafted to incorporate the best of cafe culture from home and abroad.

From the classic cappuccino to dark Turkish coffee spiced with cardamom or almond-milk lattes and cold brew. With so much coffee available, and so many tourist attractions to see, is it any wonder this country never sleeps?