On the Trail of Rail

Back in 1892, the first railway line in Israel was built between Jerusalem and Jaffa, with the long and winding road to the coast taking up to – and often more than – six hours and relying on domestic animals such as camels and mules to complete the journey. In fact, the route was described by one of the ‘fathers’ of Israel, Theodor Herzl, as a “wretched little line.” This past month, however, Israel unveiled a somewhat faster route between Jerusalem and Tel Aviv, with the launch of the country’s first-ever electric passenger train.

Israel is leading up a revolution in transportation topic, between its 2 biggest cities; The first rail track, alongside the modern rail track nowadays.

While it may be another 3-6 months before electrification is completed, the result will revolutionize travel between the country’s two biggest cities and reduce journey times between Tel Aviv and Jerusalem to around 30 minutes. But while the fast train will make travelling and exploring more of Israel far easier, the actual train stations of yesteryear have become entertainment hubs and a stopping point for tourists, in their own right.

Rail was a striking milestone for Jerusalem
Actively used since 1892, the establishment of the Old Station in Jerusalem was a striking milestone in the history of the eternal city. For more than a century, it was a hub for passengers, freight, pilgrims and more before closing 20 years ago, in August 1998. The historic Jerusalem station, once known as the Khan station, lay abandoned and vandalized before undergoing an extensive restoration in May 2013. Today, known as HaTachana HaRishona or First Station, the complex offers tourists various attractions and has become an iconic feature of Jerusalem’s tourist landscape. On the doorstep of the luxurious King David Jerusalem, the splendid Dan Panorama Jerusalem and the relaxing Dan Boutique Jerusalem hotel, First Station is a fertile ground for hundreds of events each year, drawing in visitors to an array of community and intimate events, such as rooftop yoga, as well as musical concerts, dance performances and romantic movies. An unbeatable dining experience attracts families and friends to favorites, such as Hamiznon, a kitchen station focused on dishes from Mediterranean coast, as well as the addictive Abu Shukri Hummus restaurant. First Station’s colorful markets are also all about bringing Jerusalem into your heart with fresh and local cheeses breads and wines sampled at the Organic Produce Farmer’s Market every Thursday, and unique locally designed jewelry, clothing and accessories sold at the well-known Designers Fair.

Jaffa – First railway station in the Middle East
At the other end of the 19th century train route lay Jaffa, a gateway on the Mediterranean coast. It was the first railway station in the Middle East when it was inaugurated in 1891. Closed in 1948, the old station had a chequered and abandoned past before it was restored from 2005. After being converted into an entertainment venue – HaTachana or, rather originally, The Station opened in 2009. Close to the Dan Panorama Tel Aviv and a leisurely stroll down the promenade from the Dan Tel Aviv, it sits on the southern tip of the charming Tel Aviv neighbourhood, Neve Tzedek, a cobbled network of pastel houses, designer boutiques, and cafes, especially along Shabazi Street, which ends where The Station complex begins. As you set foot inside, you will be mesmerized by the train track that used to link Jerusalem with Jaffa and more than 20 converted buildings from the Ottoman period, including the old freight building, a factory owned by a German Templar family, and the old station.

Today, contemporary ethnic food from the Jewish diaspora is available at restaurants, such as kosher restaurant Regina, while the popular Vicky Cristina offers wine and tapas in a classy and romantic ambiance in the evening. Take one of the 45 flavors of ice cream at Vaniglia while browsing the out-of-the-ordinary gifts and souvenirs at the stunning boutiques or marvel at the most creative soft paintings on display at the artist studio, Artnova. Soaked in as much history as warm sunshine, The Station, however, is loyal and committed to its roots, and you can take a ‘ride’ in an old train carriage, imagining the challenges of such a journey more than a century ago. A 3D experience of holograms, light and sound effects brings the experience to life and allows you to meet those who played an integral part in the history of old Tel Aviv and the founding of the first ever train to Jerusalem.

From the very old to the very new, trains and train stations continue to serve as an excellent platform to see the country. Whether the latest fast rail to and from Jerusalem or the 1,400-meter cable car from the First Station compound planned for 2021, these new developments will dramatically help tourists comfortably explore all of the gems that Israel has to offer. 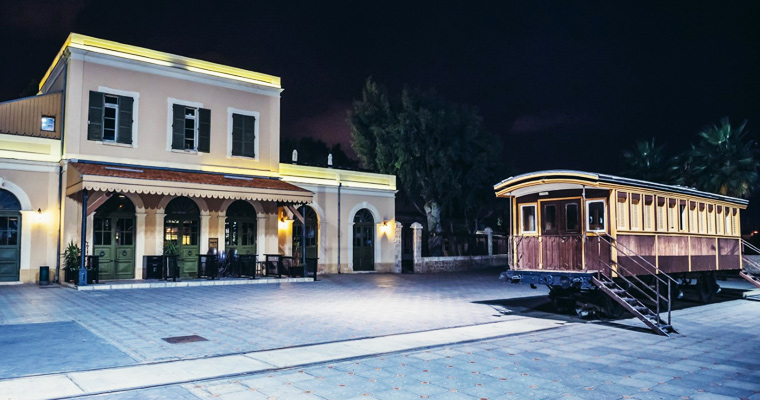