More than half of the Israel landscape is desert. The rest may well be hummus. Made from chickpeas, this Levantine dish has long since become a staple in Israeli cuisine, a work of art blending the region’s fascinating and complicated history, mashed with modern twists to decorate every plate and every palate across the country…

How can this rather simple dip from the Eastern Mediterranean region have captured the imagination of foodies for years. Cooked, mashed and blended with tahini (a sesame seed paste) olive oil, lemon juice, and seasoning, hummus has become an epic dish, an appetizer or a main course in its own right. Despite its simplicity, its addictive taste and immense popularity has long sparked debate over its precise origins, flavors and best recipes.

Hummus- a nutritious food that provides almost a complete meal at quite a low price.

Made out of the chickpea vegetable, hummus is widely believed to have originated in the Levant – in an area comprising Israel, Turkey, Jordan, Lebanon and Syria – but since when? Legend has it that ancient Greek philosophers Plato and Socrates are believed to have referred to its value in their writings, while it was also commonly eaten on the streets of ancient Rome.

Why is hummus eaten so much today? It’s the million dollar question. Firstly, it is a nutritious food that provides almost a complete meal at quite a low price. The popularity of hummus in Israel can also be partly explained that it has its origins in Mizrahi (Eastern) Jewish cuisine, but it is also relatively low fat and high in protein, and is made from ingredients that follow Jewish dietary laws, and thus can also be eaten with both meat and dairy meals. It is also relatively easy to produce on a massive scale and the ingredients are largely local.

As a result, today, it is regularly consumed on the modern streets of Israel and you should know where to go and how to enjoy it. Israel-style. Here, we explore some of the tastiest venues that you should add to your bucket list.

Popular with locals is the renowned institution that is Hummus Abu Hassan. A nice walk from the Dan Panorama Tel Aviv, this Jaffa restaurant challenges for the crown as best hummus in Tel Aviv, dishing up an incredibly tasty, fresh and creamy traditional version, as well as the wholesome masbaha, cold hummus overloaded with cooked, whole chickpeas, served in a steaming hot sauce.

Close to the Dan Tel Aviv, not far from Dizengoff Square, Mashawsha is dish typically made in the Galilee in northern Israel and is rich with addictive flavors. Similar to masbaha, but rather than whole chickpeas, this mouth-watering dish contains beans that are ‘broken’ before being cooked, which creates a paste like a chunky stew. Another favorite among locals lies in the middle of Carmel Market – Hummus HaCarmel, converted into a restaurant from a traditional synagogue, and here the hummus is simply divine. A must is the Ful (pronounced FOOL) – a fava bean sauce served hot on top of the cold hummus, scooped up with a softly warmed pita. 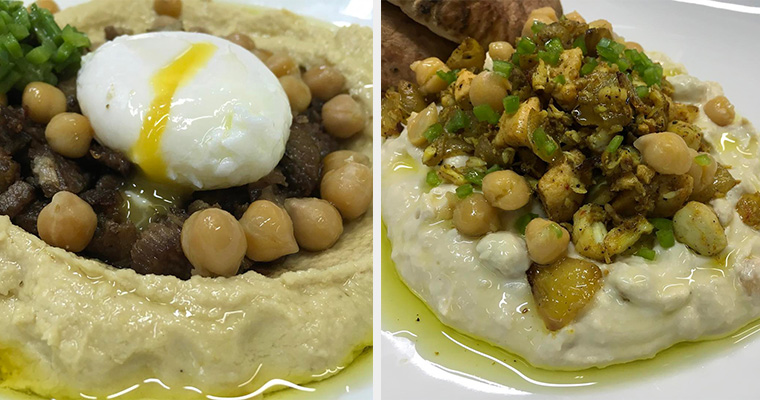 Further north, Haifa lays claim to some of the most popular hummus cafes and restaurants around.

Located less than a kilometre from the Dan Carmel Haifa is Hummus Berdichev, laying claim to Haifa’s best hummus. This authentic restaurant has perfected the art of making fresh and warm hummus, with sides of olives, pickles and onions, and what’s more – they offer a free hummus refill! in the multicultural Wadi Nisnas neighborhood, the bustling and modest institution that is Abu Shaker has been making a variety of hummus for more than 7 decades. There are many to choose from, all garnished with chopped tomato, parsley, paprika, sautéed mushrooms, pine nuts, whole chickpeas, olive oil, and many other delights.

While Jerusalem is renowned for its holy sites, there are other truly spiritual experiences to savor when it comes to the food, and the City of Gold shines brightly when it comes to hummus. A ten minute walk from the King David Jerusalem is Hummus Ben Sira, whose friendly and quick service is as impeccable as the dishes. Try the fava bean and cauliflower, caramelized mushroom or the beef hummus, just some of the favorites in an extensive and diverse menu. The range of falafel, hummus and salad dishes at the charming Abu Shukri is a sight to behold and a perfect way to round off a day of sightseeing in the Old City, while also well worth a stop is the kosher joint that is Pinati, which has been dishing up hummus and endless supply of pita bread for close to 40 years. Just 10 km west of Jerusalem is the frenetic and buzzing Abu Ghosh, an Arab institution that is as renowned for its splendid hospitality as it is for its delicious and authentic hummus. 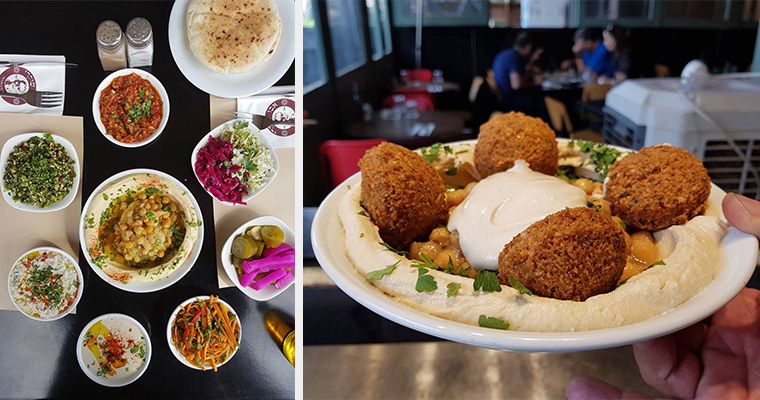 Abu Shukri restaurant in Jerusalem- A sight to behold of various Falafel, Hummus & Salads dishes; A perfect way to round off a day of sightseeing in the Old City. (Credit: Tiran Rubin)

While trying Israeli hummus should be mandatory, questions always remain. Should it be it smooth or lumpy, heavier on the tahini or on the chickpeas, crowned with fava beans or more pine nuts? And what’s on the side? fries? pickles? hot sauce? falafel?

Whichever way you resolve these crucial decisions – hummus is an Israeli staple – it is the Mediterranean summer, and the chickpea is the sun.