The Christmas Story – Where it Began

In the song “Last Christmas,” George Michael sang how he gave you his heart, but every year, Israel gives you its heart, soul and so much more….

Nowhere else comes close to the Holy Land at this magical time – the perfect place to explore, appreciate and revel in the miracle of Christmas. The Holy City of Jerusalem and Mass in Bethlehem are particularly special, while Christmas in Nazareth and the festivities in Haifa continue to attract tourists, travelers, locals and pilgrims in large numbers. 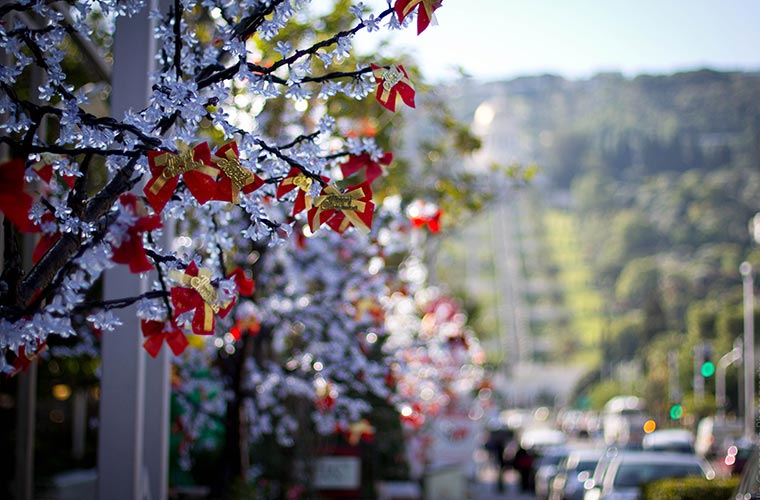 Christmas at the foot of ‘The Baha’i Garden’, Haifa.

Trace the footsteps of Jesus in Jerusalem
So many adjectives have been used to try and describe the timeless city, and at any time of the year, it is hard. At Christmas, it is unparalleled. In the land where the Christmas story took place, the festive spirit is in the air, and in nowhere more-so than Jerusalem. It is a truly meaningful experience for Christians and a fascinating time for all visitors.

The Christian Quarter of the Old City is clearly the first port of call. Here, you can be part of Christmas prayer and carol services and Midnight Mass at the Church of the Holy Sepulchre, the site of Jesus’s tomb, all within walking distance from The King David, Dan Panorama Jerusalem, and Dan Boutique Jerusalem, three of the chain’s four luxurious hotels in the city. Christmas Eve is particularly special for Christians, who walk the journey along the Via Dolorosa from the trial of Jesus to his crucifixion. The popular Jerusalem International YMCA is home to one of the many Christmas Carols concerts and singalongs in the city, and also houses the Giant 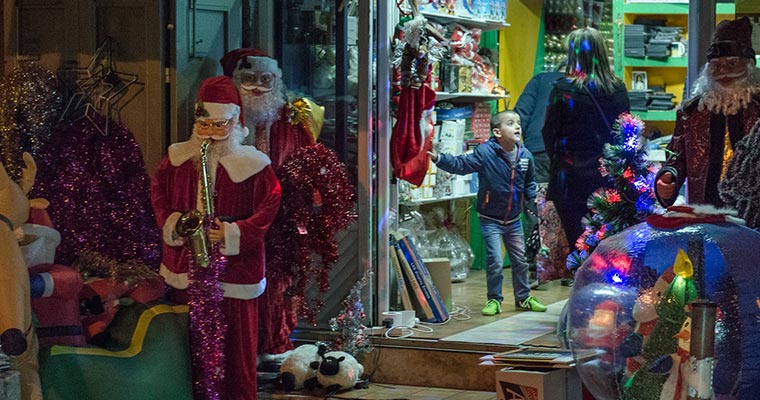 A store in the Christmas spirit, Jerusalem

O Little Town of Bethlehem
Approximately 10 kilometers south of Jerusalem is Bethlehem, the birthplace of Jesus of Nazareth. A popular tourist attraction all year round, Bethlehem’s peak season is inevitably Christmas time. While a stroll around the Old City’s Manger Square is a fascinating view of the local hustle and bustle, most visitors head straight to the town’s awe-inspiring Church of the Nativity, one of the oldest churches in the world, and one of Christianity’s holiest sites.

Today, governed by the Armenian, Roman Catholic and Greek Orthodox Churches, the Church of the Nativity traces its history back to the 4th century and is traditionally considered to be located above the cave where Jesus was born in a manger. Here in the Nativity’s Grotto is the famous star marking the precise and awe-inspiring spot. Free tickets are available for the world-famous Christmas Eve Midnight Mass, which is broadcast from the adjacent Church of St. Catherine, connected to the Church of the Nativity by a number of caves and steps, and well worth a visit.

Nazareth – Jesus’s stomping ground
With Jesus born in Bethlehem, his childhood home is widely believed to be Nazareth. Located in northern Israel, in the hills of the Galilee, Nazareth hosts a range of events throughout December to celebrate Christmas. This year, the colorful Christmas Market takes place between December 18 and 22.

Having started in 2010, the market comprises stalls of local arts, crafts and produce, a string of street performances and the lighting of the Christmas tree. Christmas Eve witnesses a parade finishing at the Basilica of the Annunciation, one of the most sacred sites in the Christian world. According to Catholic tradition, the Basilica is housed within the Church of St. Joseph and stands on the place where the Virgin Mary was told by the angel Gabriel that she would conceive Jesus. Here, there is also a Christmas Eve Midnight Mass that is popular among Christian tourists. 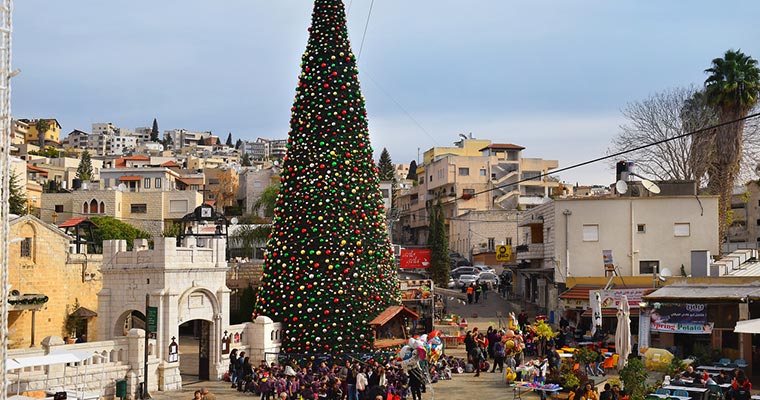 Preparations before the Christmas Holiday, Nazareth

One of the largest Christmas Trees in Jaffa
While Tel Aviv continues to celebrate the high life, it is in neighboring Jaffa where the Christmas feeling is particularly evident. It is at the city’s famous Clock Tower that visitors can, on December 17, witness the annual Lighting of the Christmas Tree, one of the largest in Israel, as well as attend the many activities and concerts at the Immanuel Church in Jaffa, a short distance from the Dan Panorama Tel Aviv. Wander through the magical cobbled alleys towards the Jaffa Port, where the Winter Festival and annual Christmas market offer a variety of gifts, culinary treats, decorations and trees to get you in the spirit of the season.

Holiday of Holidays in Haifa
Renowned for its coexistence, the northern city of Haifa offers visitors the unique opportunity to sample the “Holiday of Holidays,” which celebrates the festivals of Christmas, Hanukkah and Eid-Al Adha throughout December. The festival occurs mainly in the Arab neighborhood of Wadi Nisnas, together with the spectacular German Colony, where visitors can enjoy a festive Christmas parade, food tasting tours, musical concerts, as well as theater, street performances and children’s puppet shows. Like other cities around Israel, Haifa too offers carol singing and a special Midnight Mass service at the stunning Stella Maris Carmelite Monastery, perched on the slopes of Mount Carmel, within striking distance of the city’s elegant Dan Carmel and Dan Panorama.

George Michael may have given you his heart last Christmas, but Israel every year continues to capture it… 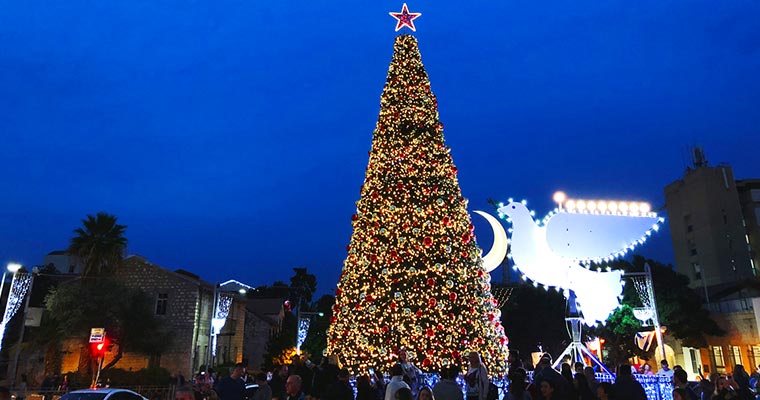 A Christmas tree decorated with lights at the ‘Holiday of Holidays’ festival, in Haifa.