Did you know that among other things dolphins engage in gossip? That the mother dolphin is one of the most invested moms?
That dolphins call each other by name? The research lab located at the Dolphin Reef in Eilat studies the behavior of the cleverest marine mammal.

Most of us know of the Dolphin Reef in Eilat. There is no doubt that it is one of the most unique places of its kind in the world, with magical views and a harmonious atmosphere between man and nature – a green, flowering oasis. Situated on the city’s breathtaking southern beach, a wooden jetty floats on the sea’s surface, making possible the viewing of dolphins going about their daily routine and the staff working according to a shared ideology — aiming to bring man closer to the environment, while setting a personal example of respect for the surrounding land and sea. The team works out of a constant desire to develop a utopian, unconditional relationship with the animals, based on mutual respect. The reef also has another, lesser known aspect. It is here that leading scientific research on the subject of dolphins and the environment takes place. 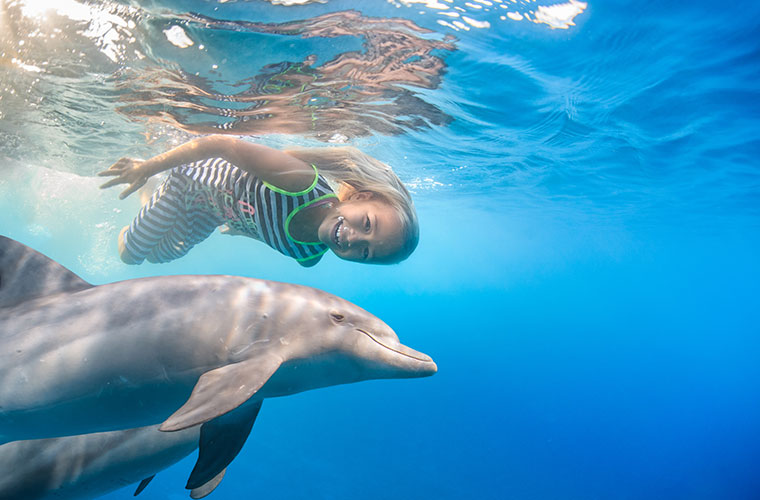 Atop an observation tower overlooking the reef, on the edge of a rickety staircase, is a research lab established in the late 1990’s by researchers from the Free University of Berlin. The laboratory  studies dolphin behavior, on the one hand, and human behavior, on the other, focusing on the special relationship between dolphins and people. Since its establishment, the laboratory has attracted researchers from around the world and has gained popularity as a research destination of choice. Today, the lab operates under the auspices of Ben-Gurion University of the Negev, serving the students – undergraduates and graduates alike – of the marine biology program.

Click to enjoy the ultimate experience in the Red Sea Hotels >>

A wide range of research is carried out at the reef. For example, researchers observed the relationship between mothers and pups and found that parental supervision is intensive and direct. Since dolphins breathe air, they must rise to the surface now and again. An adult dolphin can hold its breath and swim underwater for long periods of time, ranging from five minutes to half an hour.The pup is, of course, unable to do so, and must, therefore, rise to the surface to breathe every minute or two. Dolphin pups mimic their mothers in swimming underwater and buoyancy, and the mother signals to the pup when to dive and when to rise for air. It is for this reason that the mother shortens her underwater sojourns and tracks the pup’s breathing all day long, every day and night without rest, for nearly a year. 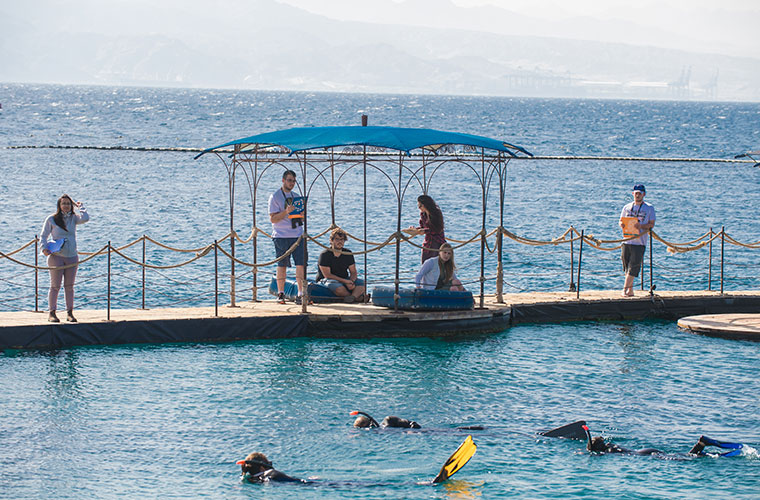 The Dolphin Reef in Eilat City

Another study examined dolphin curiosity and found that dolphins are information collectors, even if it is of no use to them, including information sought solely for the purpose of gossip. At the end of each feeding, for instance, dolphins swim and sniff out what the others have received. When the researchers increased the amount of food given to all dolphins, some didn’t finish their food and checked out if their friends had also received bigger portions.

Sounds of dolphins
Another research project studies the experience of human visitors to the dolphin reef, as well as the dolphins’ experience when people visit the reef and observe them. One of the special programs carried out at the dolphin reef provides psychological support for children challenged by emotional and communication problems – support provided with the help of dolphins. A study carried out by Sophie Donio as part of her graduate studies showed that this unique program brought about an emotional and cognitive improvement in the participating children. Sophie is currently trying to identify and distinguish between the dolphins’ influence and the impact of the water activities and personal relationships that develop between the instructors and the patients.

Alongside Israeli students, Tan Morgan from Scotland is also carrying out research on dolphin voices as part of her doctoral studies. Tan, whose advisor is Dr. Kirschenbaum of the University of Cambridge, is herself an advisor of an undergraduate student for his marine biology and biotechnology research project. Their research focuses on dolphin communication and the effects of noise emitted by boats on this sonar communication. Dolphins, for example, call each other by name. A recent fascinating finding is that dolphins “speak of” and refer by name to dolphins that aren’t around or even those that have died. 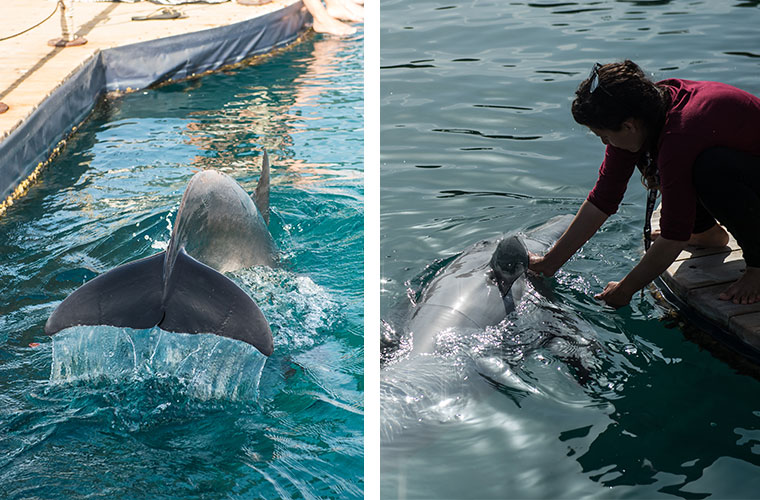 Dolphin Therapy
The academic activity at the reef is not limited to research. Unique courses on the subject of dolphin biology and dolphin therapy are taught at the research lab. The courses are designed for undergraduate marine biology and biotechnology students and for psychology students at Ben-Gurion University of the Negev, Eilat Campus, blending studies on dolphin therapy with other areas of dolphin studies (physiology, sight, dolphin identification, diving skills of marine mammals, and more). The best lecturers in the field, all with extensive experience and pioneers in the area, teach these courses.

An additional course aimed at students and practitioners, both from Israel and abroad, has become the byword in the field. Not only do animal-assisted therapists and dolphin trainers attend, but also those managing facilities which house dolphins and directors of dolphin study programs from around the world.
If you plan to visit the dolphin reef, to enjoy the magical tranquility reigning there, to watch the dolphins and maybe even swim with them, you can now, with advance notice, also join tours of the research laboratory. 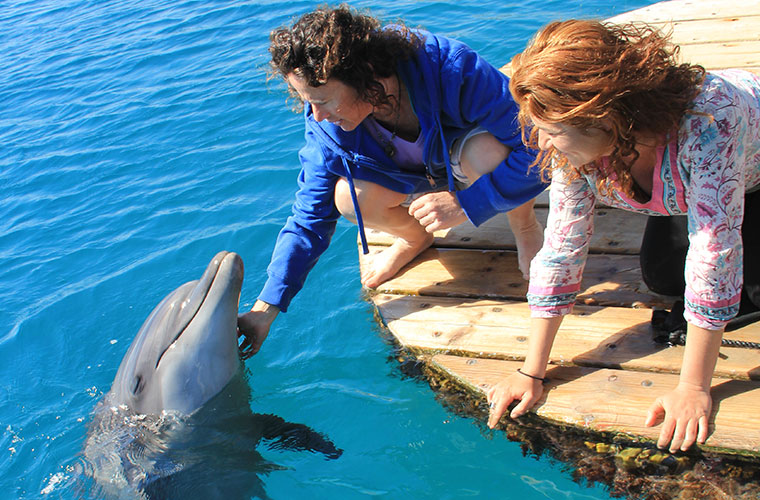 Dan Hotels offers you two hotels in Eilat, Experience the delights of the Red Sea coral reefs, while staying in unrivaled luxury at the Dan Eilat and the Dan Panorama Eilat hotel. 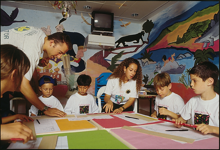 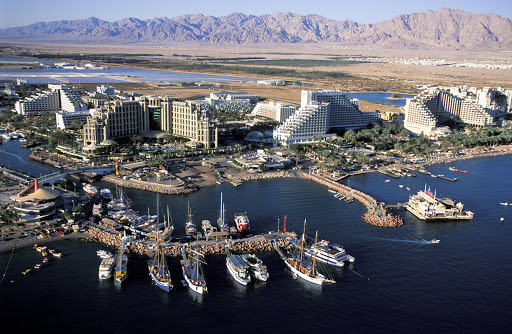 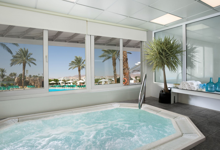 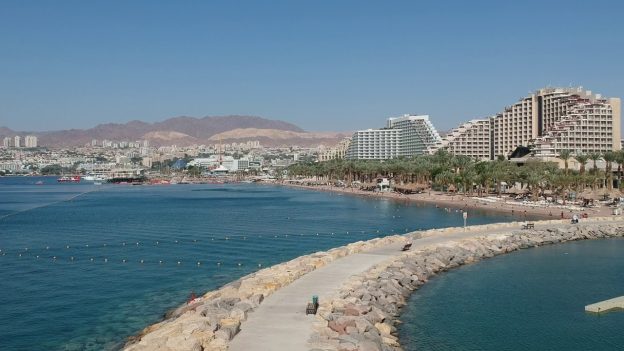