The Dan Hotels hosted Indian Prime Minister Narandra Modi on his historic visit to Israel:
The visit, which opened a new phase in Israel-India relations, and the exacting and meticulous preparations that contributed to its success.

The staff at the King David Hotel in Jerusalem, who are used to hosting heads of state and high-ranking dignitaries, were keyed up pending the visit of the Indian prime minister, Naranda Modi. The warm and heartfelt reception planned in detail over several months, and the red carpet rolled out at his feet were an expression of the deep empathy Modi commands in Israel. Modi was hosted in the prestigious Jerusalem Suite overlooking the breathtaking view of the old city, the same suite which President Trump had used two months earlier; but this time, in anticipation of Modi’s visit and following requests by his staff, some changes were made to suit the needs and comfort of their prime minister.

On the Red Carpet at the King David Hotel: Mr. Michael Federmann, board of directors chairman at Dan Hotels, welcoming the Prime Minister of India, Narandra Modi

Dan Hotels, King David Jerusalem and Dan Tel Aviv hosted the prime minister and his entourage for the various meetings held during his three-day visit to Israel.
Preparations for the visit were extremely detailed and comprehensive. Extensive experience in hosting heads of state and VIPs was the key to meeting the demands of the various bodies involved in preparation for the visit – Israeli Security Services, the Prime Minister’s Office, the Foreign Office. This led to the speedy resolution of issues such as where to roll out the red carpet, where to place the flags, entrance and exit arrangements for the guests, timing of the elevator etc.
The Indians also did not skimp on preparation. Frequent visits of senior Indian delegations in the preceding months laid the groundwork for the issues on the agenda and helped to plan the event down to the smallest detail.

Warming relationships
“We have waited almost 70 years for this visit,” Prime Minister Benjamin Netanyahu told the Indian Prime Minister, Naranda Modi, at the reception ceremony at Ben Gurion airport that kick started the historic visit of the Indian leader in Israel, a visit defined by Modi himself as “groundbreaking”. Another indication that this was an historic visit was Netanyahu’s exceptional decision to accompany Modi throughout almost the entire visit. One might say – the beginning of a wonderful friendship. 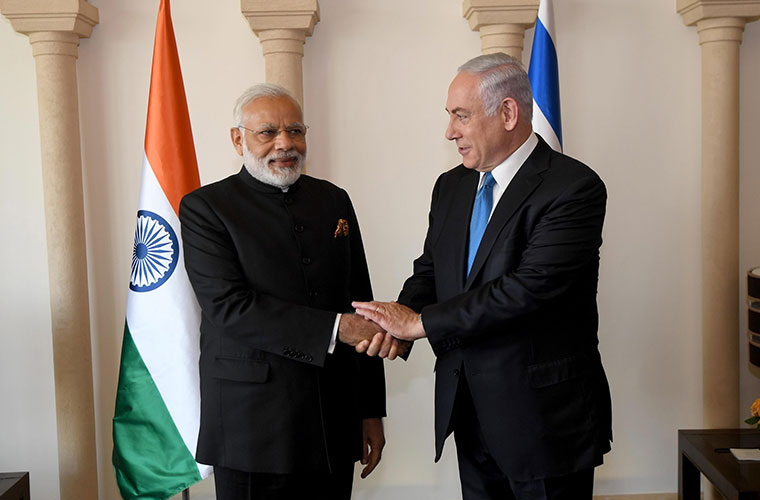 The intensive schedule required that all the meetings be conducted within the confines of the hotel, which became a teeming hive of activity and required extensive organization including strict security arrangements in coordination with security forces, preparation of various halls where the discussions and meetings between the Israeli and Indian delegations took place, provision of refreshments during the meetings and more. The complex task was accomplished by the King David staff, under the direction of the general manager Haim Shkedi, with a little help from his friends: due to the high occupancy of the hotel which included, amongst others, guests who had come for the opening event of the Maccabia, it was decided to accommodate some members of the Indian delegation at the Dan Panorama. 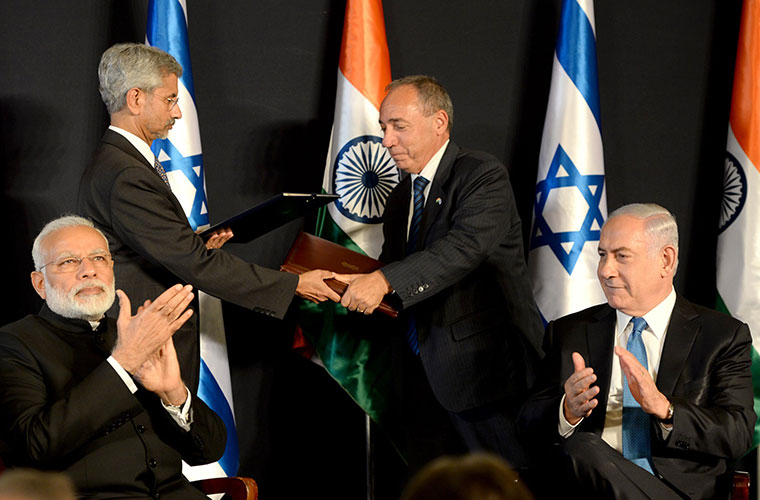 Shkedi notes with great satisfaction that the Indian delegates who were hosted at the Dan Panorama also dined at the King David Hotel, from whose kitchens wafted wonderful aromas of the Indian vegetarian dishes (details below).
Alongside the important economic and security meetings, and an extended work meeting with Benjamin Netanyahu, Modi didn’t miss meeting with President Reuven Rivlin at his office, and with opposition leader, Bougie Herzog. But the most moving meeting was with Moshe Holzberg, the 11-year-old boy whose parents, Chabad emissaries, were murdered in 2008 in Mumbai, while he himself was saved by the resourcefulness of his caregiver. “Although chairs were provided for the event, the high level of emotion, the hugging and kissing were such that everyone simply remained on their feet,” says Sheldon Ritz, the hotel’s operations manager. 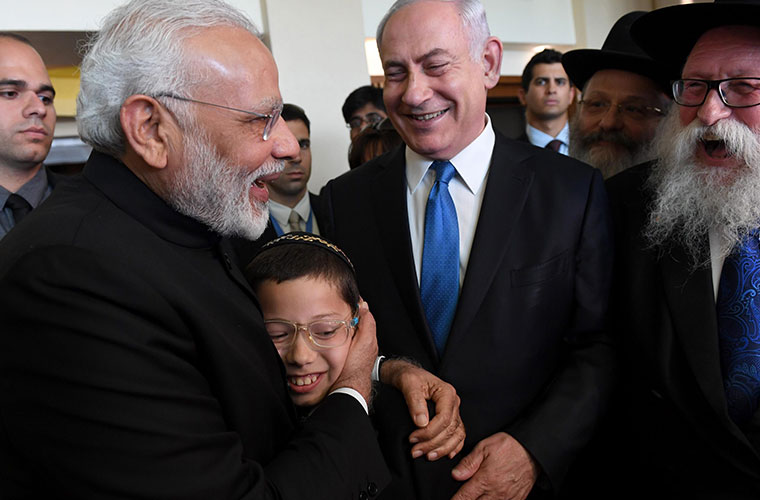 A strong embrace: an emotional meeting with Moishe, the child who survived the terror attack in Mumbai

Business and a Little Pleasure
Modi spent the last day of his visit at the Dan Tel Aviv Hotel. His schedule included a meeting with Israeli and Indian heads of financial companies, a visit to an innovation exhibition especially installed at the hotel and a meeting with Indian students studying in Israel.

But first Bibi and Modi travelled to Olga Beach to view a demonstration of an Israeli developed desalination system, and didn’t miss out on an opportunity to take off their shoes and dip their bare feet in the sea… and to commemorate the occasion with a picture worth a thousand words… business and a little pleasure.
Following the seaside diversion, Bibi and Modi drove to the Dan Tel Aviv where they met with CEOs of Israeli and Indian commercial companies at the inauguration of an Israel-India CEO forum, headed by the president of the Manufacturers Association, Shraga Brosh…
The highlight was the innovation exhibition organized at the hotel, which showcased technological innovations in the fields of energy, health, water and agriculture alongside Indian hi-tech initiatives in these fields – the aim being to encourage cooperation in the private sector between the two countries. 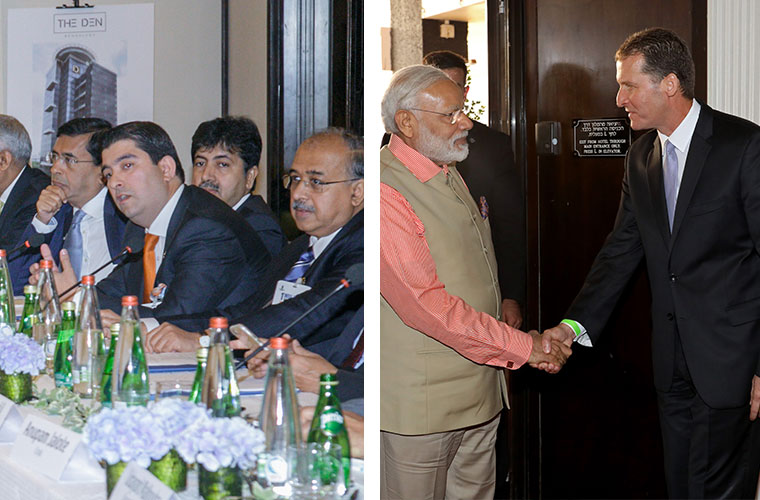 The exhibition in the King David Hotel hall included installations of six Israeli and four Indian companies. At the same time, the Indian prime minister was introduced to the first Dan Hotel outside Israel– the DEN Bangalore Hotel, a project of the Dan chain in India. (See boxed caption).
Innovation is the future. Modi’s closing meeting in Israel was also linked to the future. A group of Indian students studying various innovation-related professions met with Modi, and shared their experiences of the Israeli academic world and their aspirations. On completion of their studies they will return to India and contribute, in their various fields, to the fulfillment of Modi’s vision – to tap the enormous potential of India, increase the country’s growth rate, and create new opportunities.

Meat, Fish and Wine – Out
The customs of traditional Indian cuisine present a challenge to Israeli chefs: meat and fish are not included in the menu; vegetables yes, but not all root vegetables; many Indian people abstain from wine; and there are those who fast once a week, or on that day eat only fruit.

After consulting with experts in the field such as the Indian embassy staff and with the chefs of Reena Pushkarna (owner of the Tandoori Restaurant network), the chefs of the King David and Dan Tel Aviv hotels succeeded in creating a rich, varied and entirely vegetarian menu, displaying culinary creativity which drew compliments from Israelis and Indians alike.
With the agreement of the Indians, who showed true consideration of their Israeli colleagues, fish and wine were also served at the table, but this small digression didn’t detract from the overall menu which was prepared according to all the rules of the Indian kitchen. 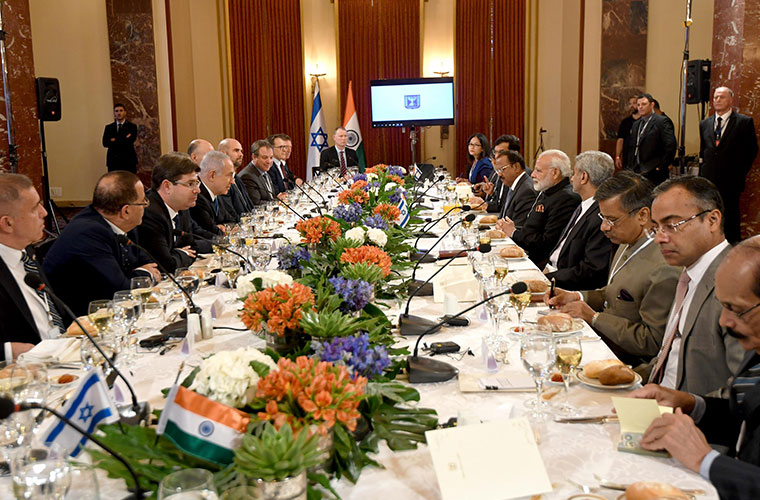 Culinary creativity at the King David Hotel: lunch based on purity of vegetarianism

Dan Hotel chain launches a hotel in India: Dan Bangalore
Dan Hotel’s next generation modern luxury hotel is due to open its doors to guests in the fall of 2017, providing an oasis of calm in the fast-growing city of Bangalore, India.

The hotel is expected to be one of Bangalore’s highest quality hotels and will offer guests authentic hospitality, a relaxed ambiance and an informal stay in the heart of India’s thriving high-tech hub.
Tapping into a rich experience in the hospitality sector, the new hotel will be one of the best business hotels in Bangalore, providing luxury accommodation, excellent service, a first-class dining experience and outstanding guest facilities.
With more and more multinationals setting up corporate offices in the city, Bangalore is one of India’s major travel destinations for both business and leisure travelers alike.