The best time of the year for gyms and recruitment agencies. By February or March, it can often be a different story. As motivation soars, and promises are made, being healthy is that old favorite on everybody’s list. Here in Israel, there has never been a better time to stick to your resolutions and keep body and mind healthily fed and thriving. Here we explore the hot trend of veganism that has engulfed the country, and in fact the world, and sample some of the best vegan restaurants and cafés as you look to grab 2019 firmly with both hands.

‘The Most Vegan Country on Earth’
It may seem particularly strange that in a country renowned for mouthwatering lamb and chicken Shawarma that Israel has been swept by a vegan revolution – so much so, that Tel Aviv – at the heart of this revolution – was described as the “Vegan Capital of the World” by British newspaper, the Independent, in November 2017. And yet, on further investigation, this is not all that surprising. Dan Hotels have risen to the trend by opening its first MEATLESS hotel The LINK Hotel & Hub situated in the heart of the vegan capital of Israel, Tel Aviv.

Widespread and well-fed, the number of people in Israel choosing a vegan diet (a plant-based, rather than animal-derived, diet) stands at around 5% of the population, the highest percentage of vegans per capita in the world, with locals embracing veganism for many cultural, health, environmental and religious reasons.

With cultural attachment to foods, such as falafel, hummus, salads and couscous, already an integral part of the Israeli diet, the availability of such fresh vegetables and fruits makes it incredibly easy to be vegan. The higher cost of meat – with an estimated two thirds of meat imported into Israel in 2016 – is another factor. Furthermore, a 2012 report estimated that 75% of Israeli Jews keep a kosher diet and many vegan products are often already kosher, on top of which many Israelis are translating kashrut laws, designed to prevent animal suffering, into a broader vegan lifestyle.

You can enjoy learning about the cultural backdrop to this ongoing revolution with informed tours, such as TLVEG Vegan Tours, which was the first to run tours in Israel and has taken visitors to some of the most flavorsome vegan eateries around since the company launched four years ago. Among our own personal recommendations are Meshek Barzilai in the Tel Aviv neighborhood of Neve Tzedek, a short walk from the Dan Panorama Tel Aviv. This organic vegetarian restaurant dishes up a mostly vegan menu of creative dishes taking recipes and flavors from traditional Israeli dishes, such as vegan shakshuka, using the brightest tomatoes, eggplants and zucchinis. New vegan shawarma is available at the vintage but quirky Zakaim, a dynamic south Tel Aviv boutique vegan restaurant popular for its homemade vegan cheese, as well as the Beyond Meat Burger, a meat alternative pleasing both vegan and meat eaters. And if it’s pizza you’re after, after Domino’s Pizza launched its first vegan pizza with non-dairy cheese in 2013, the Green Cat pizzeria opened in 2014 and has been one of the most popular chilled vegan hangouts since, offering all-vegan pizzeria, with toppings including sweet potato and seitan. 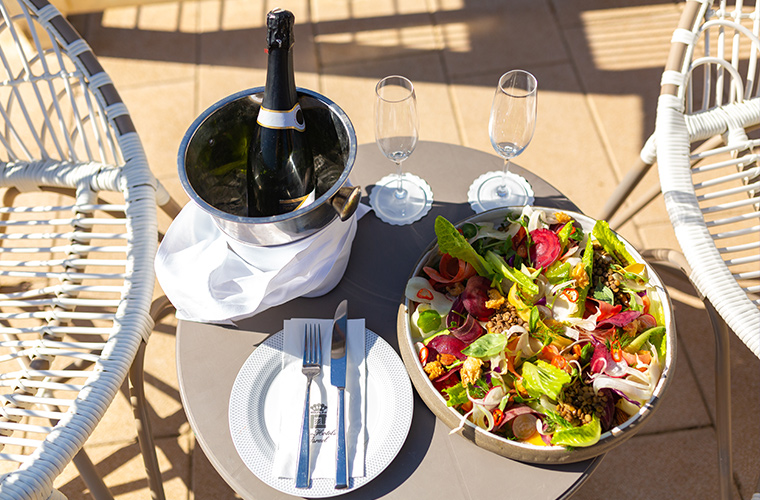 A vegan salad served at one of the Dan Hotels

There is an array of delightful and charming, high quality vegan coffee shops in Tel Aviv, such as the casual Frishman Street’s Anastasia offering a terrific breakfast menu with vegan omelets, nut-made cheeses and a range of creative dips. Surrounding Dizengoff Square, Café Nahat stands out for its own in-house micro-roastery, serving fantastic coffee and a range of vegan friendly options and salads, while within pita eating distance from the Dan Tel Aviv, the bohemian Café Xoho has become a regular home-away-from-home to both local and tourists. An extensive vegetarian menu, with vegan and gluten-free options, include the satisfying juanito burrito.

While the vegan spotlight shines brightly in Tel Aviv, it very much sparkles in Haifa, Hertzilya  and Jerusalem too. Close to the Dan Carmel and Dan Panorama Haifa lies the magnificent Umm Kulthum, a cosy venue offering generous portions of high quality vegan food served by a warm and professional staff, while Rabbit Hole is a popular venue for vegan shawarmas, salads and boutique beers. Interestingly, Robin Food in Haifa is considered the first social restaurant in Israel – based on rescued vegetables and fruits collected from farms, markets and shops and that would otherwise be wasted. This produce is miraculously and tastefully turned into delicious meals by a chef and his team of amazing volunteers, who create an ever-changing menu! 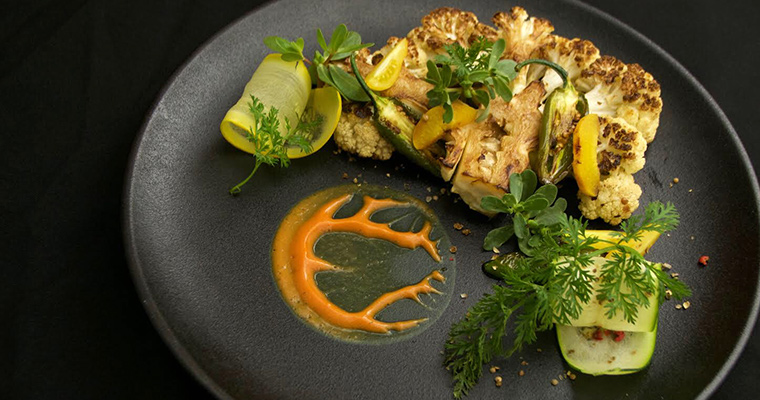 The menu is also extraordinary in Jerusalem’s Nagila Vegan Restaurant, a strictly kosher culinary gem in a quiet alley near Mahane Yehuda market. From the vegan lasagna to the lentil and cashew shakshuka, you will not be disappointed at the creativity and skill of this family-run team. Close by is Nocturno Café Resto Bar, both a 20-minute walk from the King David Hotel and Dan Panorama Jerusalem. Here you can enjoy the stunning presentation and taste of some of the best vegan burgers around – a lentil burger wrapped in a ciabatta bun, seasoned and layered in pan-seared mushrooms and caramelized onions.

In 2017, there were hundreds of vegan restaurants, such as the ones mentioned, and an estimated 700 vegan businesses in Israel, not to mention a vegan festival and an Annual Vegan Congress. In fact, so high is vegan fever that even the Israel Defense Forces – with 1 in 18 soldiers declared vegan – now providing vegan-friendly ration packs, non-leather boots and berets containing no wool at all. And of course, all Dan Hotels whip up incredibly mouth-watering vegan dishes and offer special items on the breakfast buffet, along-side the ever present wide selection of salads and vegetables. Mention to a team member in the dining room, or prior to arrival, to be sure that you’re made aware of all the options available, there may be more than you see!

Two Dishes on the VeganTour TLV

As Israel is a small country of many immigrants from around the world, the willingness to sample new dishes, and the exposure to them, is striking. With vegan food increasingly at the forefront, you too should enjoy this trend.