The White House is Here

For a period of 24 hours, the King David Jerusalem was transformed into Trump’s stronghold.
On the occasion of the historic visit to Israel, the King David Hotel placed all of its rooms and suites at the disposal of the President and his entourage. 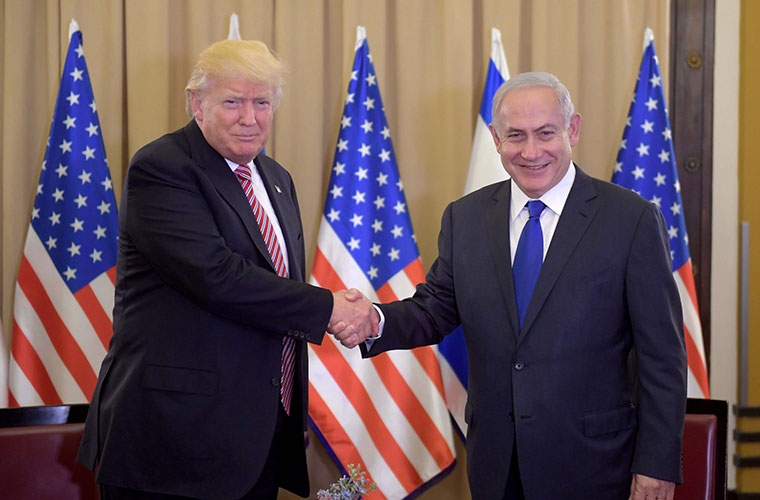 Trump & Netanyahu in a meeting at the King David Hotel

The touchdown of Air Force One at Ben Gurion airport with United States President Donald Trump and his entourage, was without doubt an historic moment: never before has Israel been included in the first overseas visit of an American President. A brief visit of only one day, but the preparations, unprecedented in their scope and breadth transformed the King David Hotel and all its 233 rooms into the fortified residence of President Trump for his stay in Israel.

The final announcement of the exact date, received only a short time before the visit, immediately mobilized the hotel: hundreds of guests previously booked into the hotel rooms were reassigned to another hotel for the day. “Happily, or unhappily for us, the hotel was fully booked “says Haim Shkedi, the hotel General Manager. “Maybe our guests were not overjoyed, but they did show understanding and cooperation. After all, not every day do we host the President of the United States.”

Due to its sophisticated design, elegance, and warm guest reception, the King David Hotel is renowned as the preferred hotel of Presidents, Heads of State and many world leaders – including artists, intellectuals, film stars, and others. The red carpet rolled out in their honor has been stepped upon by former Presidents of the United States, Barack Obama, George W. Bush, George Bush- the father, Bill Clinton, his wife, Secretary of State Hillary Clinton, Condoleezza Rice, German Chancellor Angela Merkel, Russian President Vladimir Putin, King Hussein of Jordan, Prince Charles, heir to the British Crown, former French President Nicolas Sarkozy, the Spanish Crown Prince Felipe, and many others. 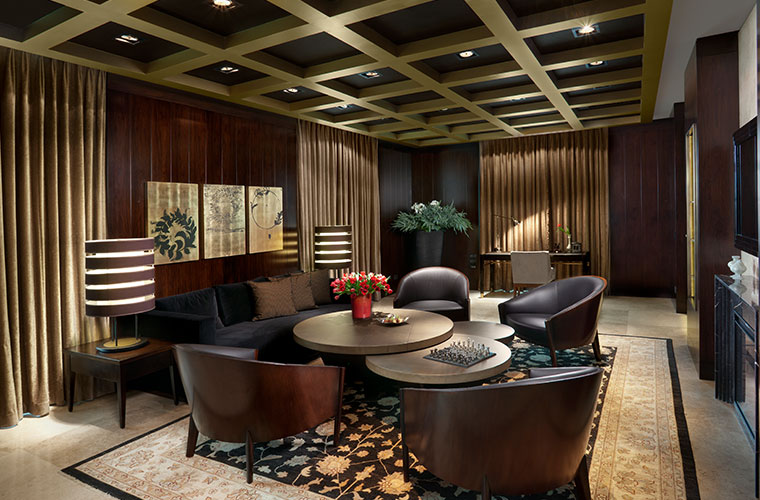 Luxurious “Jerusalem Suite”, where there the President Trump was hosted

On the Red Carpet
Shkedi is the man who perhaps more than anyone has accumulated serious mileage in the art of hosting VIPs. Highly energized about the pending visit, he controls the situation with a steady hand, and in his characteristically quiet style organizes everything necessary for its success – and this time a lot more than usual was required. Being the first visit of President Trump, learning his particular needs and priorities had to be done ‘on the go’.

After completing two important stops on his visit: the President’s residence, for a festive reception with President Reuven (Ruby) Rivlin and his wife, and visiting the Western Wall, the President would come for a short rest before going out to dine with Netanyahu at the Prime Minister’s Jerusalem residence. The visit to the Wall was defined as private, but the annals of history will record this as the first time a sitting American President visited the holy place. Furthermore, this has special significance as it took place in the week celebrating 50 years of the unification of Jerusalem.

After walking down the red carpet and a short, impressive and dignified reception ceremony at the hotel, Sheldon Ritz, Director of Operations of the hotel, accompanied the President to the exclusive Jerusalem Suite. The spacious 160m2 suite, with its superb view of the Old City, is fitted with cutting edge technological fixtures, and includes a lounge, meeting room, and personal gym. The fact that Trump himself owns a network of exclusive hotels in the United States was indeed challenging. However, Shkedi was confident that in view of the high standards to which the President is accustomed, an exceptional hospitality experience awaited him, due to the unique combination of “a hotel with a rich history and an unparalleled view, not just because it is beautiful but because it is singular.” 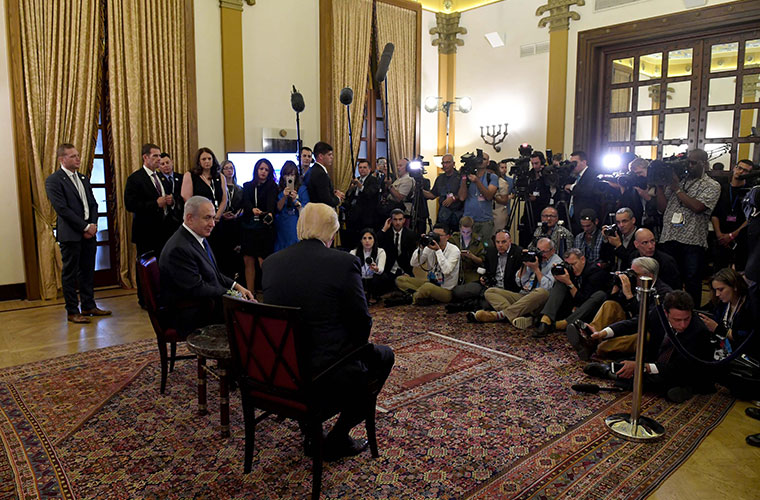 Meeting with the media delegates at the King David Hotel

Presidential Hug
Trump’s intensive schedule in Israel did not really enable him to enjoy all of the facilities of the hotel; the President was here to work.

His morning began with a meeting with the Chairman of the Palestinian Authority, Abu Mazzen, in Bethlehem. Immediately following the meeting with Abu Mazzen, the Presidential Cavalcade returned to Jerusalem to visit Yad Vashem, where the Presidential couple laid a wreath at the Hall of Remembrance in memory of the Holocaust victims, and the President delivered a speech which Netanyahu called exceptional and moving. The US President concluded his one-day visit to Israel with a speech at the Israel Museum, in which he promised to broker the political process and expressed his personal obligation to assist both sides to reach a peace agreement. 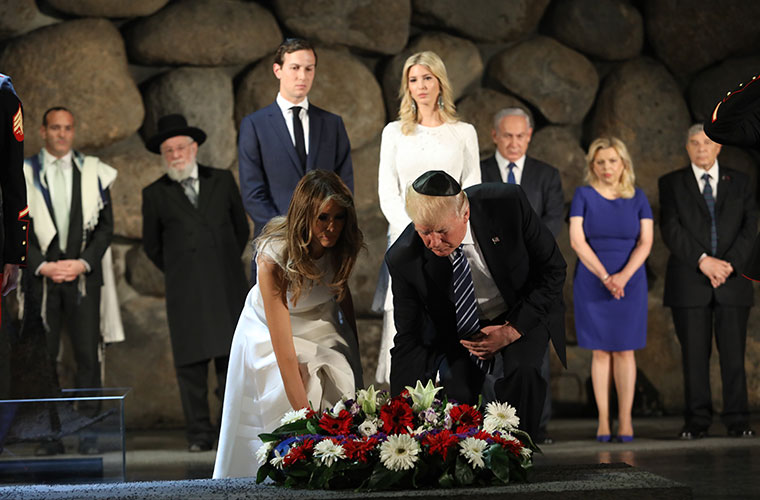 The Presidential couple laying a wreath, in memory of the victims, during their visit to Yad Vashem

While Air Force One was revving its engines in anticipation of the President’s continuing journey to Rome where he would meet the Pope at the Vatican, at the King David Hotel preparations were being made to dismantle the special security measures installed for the visit and to return to normal routine – but not before the wheels of the plane had lifted off the runway and following protocol, the green light was given in the professional terminology, “Wheels Up.”

On his return to the White House, the President via the United States Special Representative for International Negotiations, Jason Greenblatt, expressed his thanks for the hospitality of the King David Hotel in a handwritten note on official White House stationary in the following words: Thank you, my stay at the King David was great. 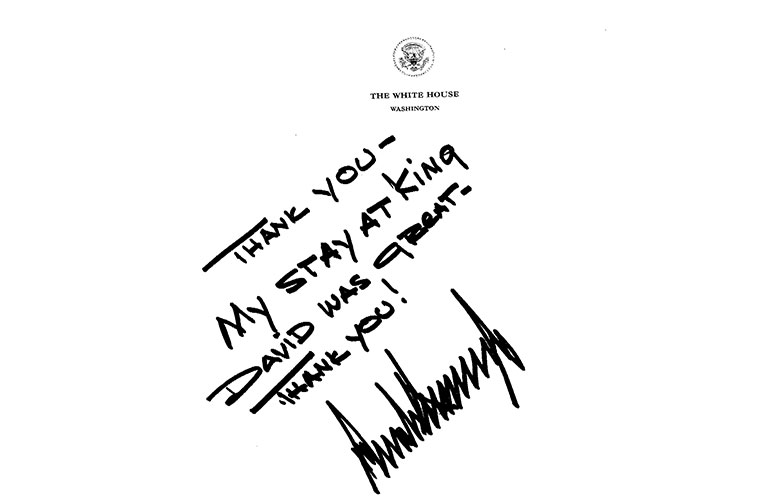 Five Tidbits….
In preparation for the visit, 30 American cargo planes landed with tons of equipment, and 56 vehicles including 14 limousines – one of which was The Beast – the armored Presidential vehicle.

While President Trump spent quality time in his Jerusalem suite, his wife Melania and daughter Ivanka used their time in the hotel to enjoy some of the inhouse pampering treatments offered, such as beauty treatments at the hairdressing salon, massage and more.

In contrast to other VIPs who have been hosted at the hotel, Trump actually did not have any special requests, but he did not give up on his mint flavored Tic-Tac sweets. Of course, the hotel was only too happy to oblige and the requested packet awaited him in his suite.

The continental breakfast served to the President in his suite was prepared in the hotel kitchen by a combined Israeli-American team in a culinary collaboration first.

During his visit to the Western Wall the President wore a skull cap and placed a note between the stones. His wife Melania placed her hand on the wall and his daughter Ivanka, it is said, even shed a tear.