The Taste of Jerusalem

For the people that live in Jerusalem it’s one word “Machneyudah”.

For tourists it’s probably the most colorful and beautiful market in Israel. Visitors come to Jerusalem to visit all the famous holy temples: huge synagogues, elaborate churches and mosques. 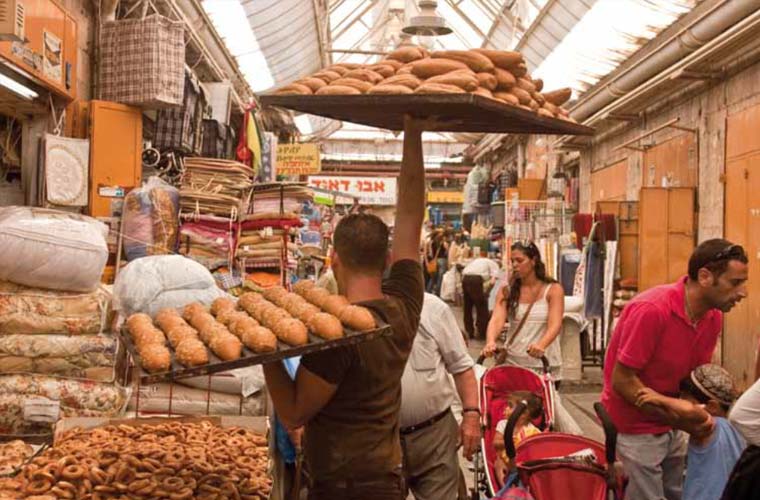 Those wishing to experience the mundane, everyday experience and the taste of traditional Jerusalem should visit the renowned neighborhoods named “Lev Ha’Ir” and “Nachlaot”, picturesque neighborhoods, water wells and washing hanging out in the garden. At the heart of these neighborhoods is “Machane Yehuda” market that is considered by most to be the most colorful and beautiful market in Israel.

For Reservations in Jerusalem Hotels >>

Between the Yafo and Agripas roads lies the market that is defined by two main streets: one sheltered and the other is open air. These two streets are the main links between many other smaller streets that all lead to the market.

I love old markets and as a regular customer I have chosen a few places that I am particularly fond of amongst the many others. As an amateur baker and a lover of breads and pastries, I have a fond attraction to bakeries. The smell of baking captivates my nose and I’m always willing to devote myself to the aroma of a freshly baked loaf of bread. I used to visit bakeries like Chaba and Calderon, but in recent years bakeries that bake whole wheat and rye bread have sprung up and the memories of the fine taste stay with me the entire week. Teller Bakery has brought with it a new spirit to the market.

Avishay Teller: “I was a baker for two years in Kfar Eztion, and when we opened the bakery I wanted to bring the news of homemade baking to Jerusalem.. Today we have 14 different kinds of bread, from ciabatta and baguettes to whole wheat and rye bread and many more”. All are handmade and the dough kneaders – young and enthusiastic people from Jerusalem – love their work.

You can meet the skilled baker, Russell Zaks, on the doorstep of a bakery called “Ha’Dekel 2”. The breads baked here are wheat, spelt and rye breads and those who prefer a baguette or white bread can find it here. Russell Zaks, a former photographer who worked for the Red Cross, learnt the secrets of white flour from an old Italian baker in South Africa and the secrets of rye in Stockholm. Working beside him is Nisan, also a baker and a religious Jew born in Sweden renowned for its expertise in bakery. “The market atmosphere that brought me here also brings a variety atmosphere that brought me here also brings a variety of customers” says Russell Zaks. 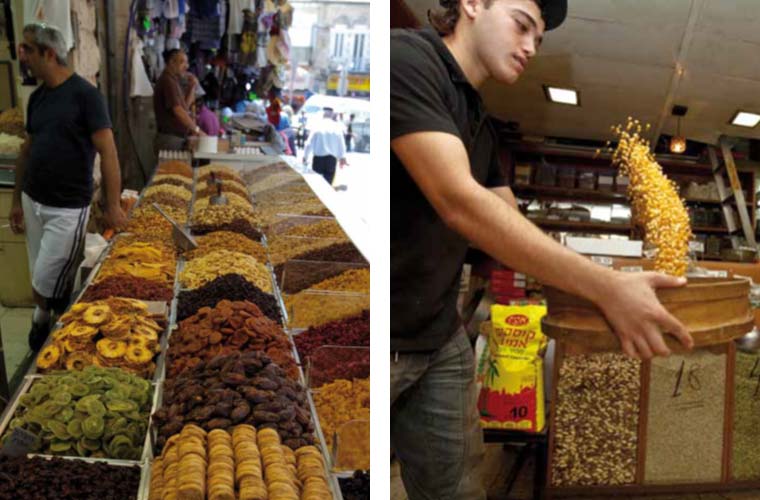 Machneyudah – in a single word

Alongside the colorful stalls overflowing with fruit and veg, butchers and spice stalls, coffee shops and restaurants have sprung up throughout the market, allowing buyers and casual visitors to spend time and enjoy the market atmosphere. Among them, the trendy restaurant Machneyehuda (no it’s not a spelling mistake, that’s the precise way that locals pronounce it – in one breath) and the “Hachpuria” – a small place selling Georgian dishes. The Aroma chain of coffee houses has also opened a branch here. The first place to open in the new spirit of the market 12 years ago was a Parisian style café named “Mizrachi”, owned by two brothers – Shlomo and Moshe . Shlomo owns a veg shop in the market and inside hangs a picture of his father Eliyahu, who also owned a shop in the market and his children have carried on the tradition He started off with a stall. Moshe owns probably the noisiest shop in the market that specializes in green herbs: parsley, coriander, celery, mint and cress, and the strong smell portrays the freshness. Moshe says that he has been in the market his whole life. “As children we unloaded watermelons for just a few pennies, to earn more we collected beer and juice bottle tops and sold them back to the manufacturer in Givat Shaul.”

Yossi Mizrahi, owner of a nut shop is also a member of this extensive family and the son of “Tzachko” – brother of Shlomo and Moshe. The late “Tzachko” earned his nickname because he always loved to laugh. He is remembered as someone who modestly contributed to the poor. Amongst the “mountains” of nuts almonds and dried fruit, Yossi makes granola mixed with assorted nuts that tastes heavenly. He continues to run his father’s shop. “In 1984,” says Yossi “Dad wanted to go to abroad for the first time in his life, and I’ve been here ever since.”

Mahane Yehuda Market was established at the end of the 19th century, as a temporary market where Arab women would sell their produce to the Jewish residents who began to settle in the area. The market is also called Chaim Valero Market, after one of the most wealthy property owners in Jerusalem. As time went by, the market grew and Jewish merchants began to sell their wares in makeshift stalls and harsh conditions. The first shop belonged to the Etz Chaim Yeshiva that built shops to support the big and famous Yeshiva located in the old city. The shops expanded next to Jaffa Street and later additional shops that belonged to the Yeshiva also opened.

Two Rooms above a Veg Shop

During the British Mandate period, in the twenties, some of the traders incorporated – mostly members of the Persian community and among them the Cohen and Banai families – who established four rows of shops that are today, located on the nearby Ha’agas and Ha’tapuach streets. The Banai family resided at Ha’Agas 1 and Meir Banai, who married his cousin when she was 15, lived with her family on Nissim Bachar St. A few years later the young couple moved to a spacious two bedroom flat, over the family’s vegetable store. They moved there with their six children, Shmuel, Yaacov, Aliza, Avraham, Yitzhak and Yosef. Whilst living there his wife gave birth to Chaim and Gabriel (Gavr) Today the street is called Eliyahu Yaakov Banai, in the name of the grandfather who was a revered storyteller, actor and accomplished musician. Yossi and Gavri Banai, who grew up under the influence of their grandfather have undoubtedly inherited many of his talents.
Today the house number has changed and is now number 11, there you can find a vegetarian restaurant called Ha’agas 1. Meir Eliyahu Bana’ s signature can still be seen on the iron grille at the front of the restaurant (later the signature changed and the letter “I” was added to the family surname). In 1930, 81 merchants got together and decided to buy land from Valero and they borrowed money from the Savings and Loans bank. This purchase On Ha’Shaked St. there is a sign that reads: Savings and formed the character of the market and made it what it is today.

For Reservations at The King David  Jerusalem Hotel >>

Loan Market was built by the city community for the Jews of Jerusalem, 1931.
A Market of Beauty and Character Mahane Yehuda market consists of two main streets and small side streets between them. We’ll start our tour from Etz Chaim St. on Jaffa corner. An unusual structure that can be seen from here is Jerusalem’s first “Skyscraper”; a 4-storey hostel, built in 1908 and known as the sundial – a sort of giant “Smiley” sundial with two clocks. The market served as the neighborhood meeting place in the days of the British Mandate.
The first place we come across is the small Georgian section of the market with its old but refurbished stalls selling spices, haberdashery, vegetables and fruits, butchery and fish stalls and a commercial bakery. To our right, Ha’Tapuach Street and straight after Banai Street. These were the first street built in the market and on the corner of one street a particularly stylish sign.
Taking a stroll down Ha’Afarsek Street we’ll reach Ha’Shezif Street where we can sit down and indulge in a cup of freshly ground coffee and enjoy homemade pastries.
Café Mizrachi is a combination of a typical Parisian style coffee house with the added chic of Jerusalem that has turned it into one of the most successful in the market. Sit inside or if you prefer people watching there is a lovely little outside balcony.

The next street is Ha’Shaked, colorful and full of hustle and bustle. Here you’ll find Yossi Mizrachi’s nut shop and the renowned shop, David’s Fish. Opposite is Ha’Egoz Street that has undergone quite a few changes and has a variety of shops: flowers, candies, excellent ice-cream, restaurant, and designer clothes, screen printed t-shirts and ceramics where 11 ceramic artisans sell their works.
At Uzi Eli’s shop, who is nicknamed “Citrus Man” you can enjoy a glass of freshly squeezed juice and products he has concocted for stress relief. You can even ask for a glass of fertility juice or juice for a peaceful home!

For Reservation at Dan Jerusalem Hotel >>

Passing through to Machane Yehuda Street, we enter the Iraqi section of the market and here we’ll end our tour at “Azura” restaurant and watch the “Hamar” where men spend their time playing cards, dominos, drinking arak or tea and generally passing time. The Hamar is a place that holds many memories for the citizens of Jerusalem, if you start a conversation you’ll hear many stories, past experiences and examples of the old days in the eternal city.

This is Mahane Yehuda Market – unique and one of a kind. Some say it is full of typical Jerusalem character, others say it holds the character of the market, but all agree that it has a great character.

Four Dan Hotels in the Capital

• The King David is perfectly located opposite the Old City walls, adjacent to the city center and a series of fascinating attractions such as Mamilla, King David’s Tower, The Time Elevator, Botanical gardens, and more.

• The Dan Jerusalem situated on the slopes of Mount Scopus, boasts breathtaking views of the Old City and the Judean Hills. The hotel is located a short walk from the old town’s lookout post and light rail station, which allows hotel guests easy access to many major sites and attractions.

• The Dan Panorama, overlooking the enchanting landscape of Jerusalem, is located near the city’s shopping, culture and entertainment center. The hotel is situated in a perfect starting point from which you can discover the different aspects the city has to offer – the sacred and profane, past and future, East and West.

• The Dan Boutique is located on a hilltop in front of Mount Zion and the Old City walls, close to many tourist attractions, within walking distance of the German Colony and near the old train station, which has become the entertainment and leisure center of Jerusalem. 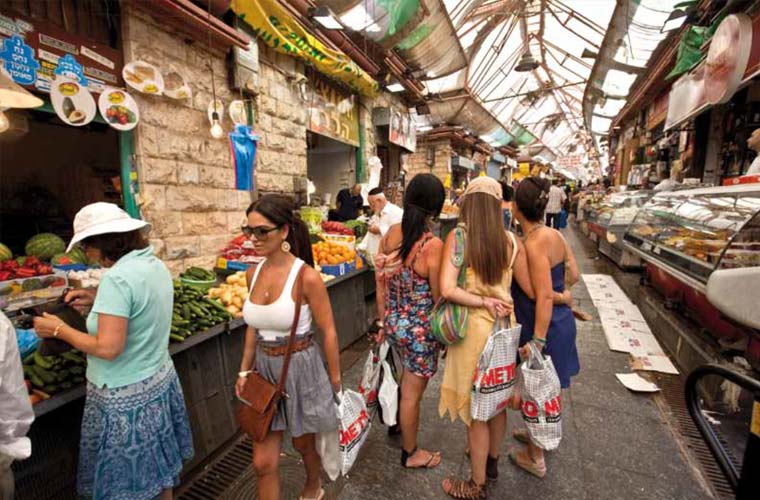