Israel – Country with a flourishing wildlife

“What drives me is that moment of discovery. I love the unknown,” says Jeff Corwin, well known wildlife biologist and host of American TV show Animal Planet. Nowhere is this discovery of the unknown more startling than in Israel.

Roughly the same size as New Jersey and with 60% of the country desert, Israel has an astonishing and thriving range of wildlife in the sky, on the ground and underwater to entertain the keenest photographer and educate the most curious of minds. From north to south, there are opportunities to spot wildlife in their natural habitat and be a guest in their world. 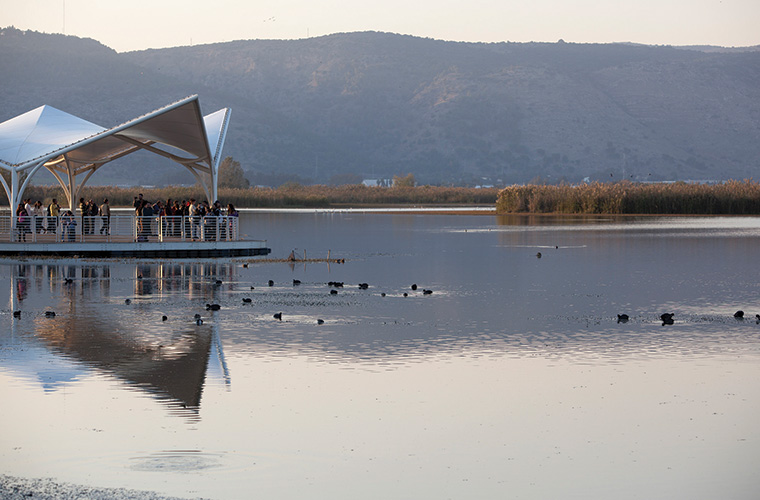 Israel has an astonishing diversity of wildlife in the sky, on the ground and underwater

This is particularly evident every spring in northern Israel’s Hula Nature Reserve, nestled in heart of the Hula Valley. Once 15,000 acres of swampland, the Hula Valley is a site of worldwide significance for water birds and a most important wetland reserve in the Middle East.

After it was drained to combat malaria, the lake was then preserved and later became a nature reserve, Israel’s first, in 1964. Now home to an overwhelming number of species of plants and fish, it is best known as a ‘transit airport’ or a stopping point for 500 million birds as they migrate between Europe and Africa. Pelicans, herons, white-tailed eagles, storks, and cranes are among the 400 species making the flight.

The park has become a flagship model for the protection and preservation of, and cooperation between, nature, tourism and agriculture. With bicycles and golf carts available, the park, located between Kiryat Shmona and Rosh Pina, makes for a wonderful day trip for the whole family, two hours north of Tel Aviv.

While the skies capture your imagination and sense of wonder at Hula, Ramat Gan Safari (officially, the Zoological Center Tel Aviv-Ramat Gan), half an hour drive from the Dan Tel Aviv, is considered to be the biggest and one of the most impressive collections of protected wildlife in the Middle East.

First established as a national park in 1951, today, the 250-acre site includes a modern, spacious and open-air zoo and a drive-through African safari area and is home to more than 100 species of birds, 80 species of mammals and 25 species of reptiles, attracting more than 700,000 visitors each year.

Just recently, the Ramat Gan Safari welcomed Rami, the 29th rhino to be born there. The site offers visitors a range of tours, including dusk and nighttime tours, providing the chance to observe the social behaviors and feeding habits of herds of wild animals, including African and Asian elephants, gorillas, chimpanzees, orangutans, hippos and lions.

Smaller but no less impressive is the enchanting Biblical Zoo, considered one of the top tourist attractions in Israel, attracting more than 750,000 visitors annually since opening in its current location in 1993.

Emphasizing indigenous species from Israel, the zoo hosts more than 170 species of animals, with a special emphasis on those mentioned in the Bible, as well as endangered species, which benefit from a raft of domestic and international wildlife conservation programs.

The park’s centerpiece is a man-made lake, bordered by spacious lawns and picnic spots and includes a petting corner, Friendly Animal Houses and the Noah’s Ark Sculpture Garden. Located in a valley on the southern outskirts of Jerusalem, surrounded by green hills and modern neighborhoods, the park is easily accessible by car or public transport.

Far from the plains of the Serengeti… 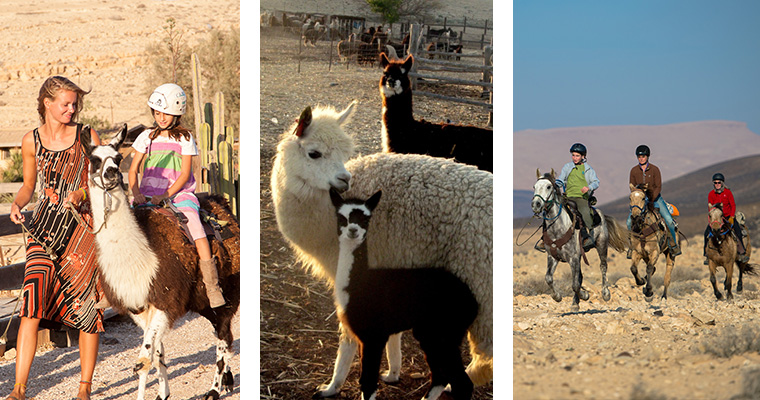 While you may not expect to find these particular creatures so far from the plains of the Serengeti, you probably would not expect to see alpacas and llamas, often found in the Andes Mountains of South America.

However, the truly remarkable Alpaca Farm, near Mitzpeh Ramon, a hot desert town on the southern road to Eilat, has one of the largest herds of alpacas and llamas in the world and one of few such farms outside of South America.

Discover the history of the farm, and the nearby Ramon Crater, as well as learn more about shearing and alpaca wool. Children can enjoy llama rides while the whole family can enjoy horseback riding, set against a backdrop of pristine desert wilderness. 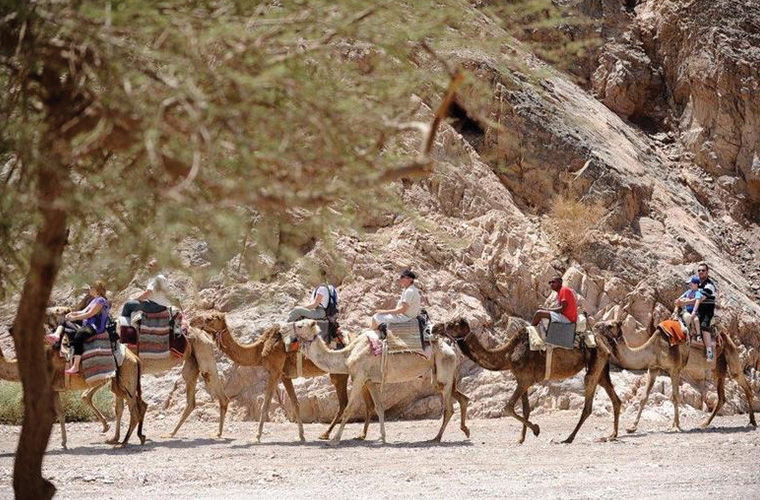 With llamas and alpacas described as “miniature camels,” the more traditional camels are available to appreciate and enjoy throughout southern Israel. While they don’t tend to roam the streets of Tel Aviv or Jerusalem, you will find a number of camel ranches dotted through the Negev desert, on the way to Eilat.

You can discover, experience and enjoy riding camels that are indigenous to the area in a number of areas, including the popular and professional Camel Ranch Eilat. With tours ranging from half an hour to half a day, Camel Ranch Eilat is situated at the entrance to Wadi Shlomo, ten minutes from the center of Eilat and the starting point for many desert trails.

Here, professional tour guides escort you on an enjoyable camel ride in rugged and breathtaking scenery with spectacular views of Egypt, Jordan, Saudi Arabia and the Red Sea before bringing you back to camp to enjoy pita and labaneh.

Treasures glimmering underneath the Red Sea

If you want a well-deserved break from the desert sun, there are many opportunities in Eilat to explore secret treasures glimmering underneath the Red Sea.

Take a memorable dive at the Coral Beach Nature Reserve, a world of technicolor, a short drive south of the Dolphin Reef Eilat, itself, a unique ecological site around the world where visitors magically bond with dolphins in their natural habitat, choosing either to snorkel or dive among these more intelligent mammals.

Come visit Dan hotels in Eilat near the Red Sea >>

If you are feeling somewhat bolder, the Underwater Observatory Marine Park boasts Sharks World, the largest shark pool in the Middle East, allowing visitors to witness the fascinating world of 20 types of sharks, including tiger, fox and hammerhead sharks, up close and personal – but not too close! Offering stunning photo opportunities of the Gulf of Eilat, the Marine Park contains more than 800 species of fish, coral, stingrays, turtles and much more as well as the opportunity to take a short cruise on the Coral 2000, a glass bottom boat, to capture amazing views of the coral and lose yourself in all that Mother Nature has to offer. 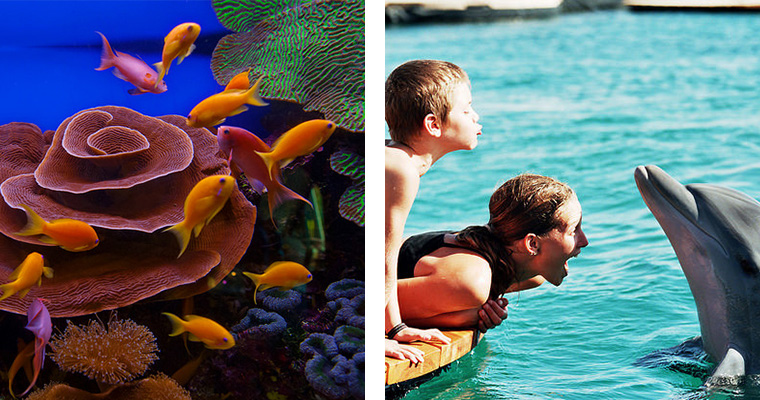 Israel and tropical rainforests are probably words you don’t hear uttered in the same breath every day.

And yet, you can also effortlessly lose yourself in the beautifully maintained Utopia Park, one of the only parks worldwide where a delightful tropical rainforest displays thousands of orchids from all around the world, as well as tropical plants, many animals, parrots and carnivorous plants.

Spread out over an incredible 40,000 square meter area, the park is located in the serene Kibbutz Bahan, in the heart of the Sharon (or central) region and offers beautiful wide open green spaces, and even two giant plant mazes, for visitors to enjoy. 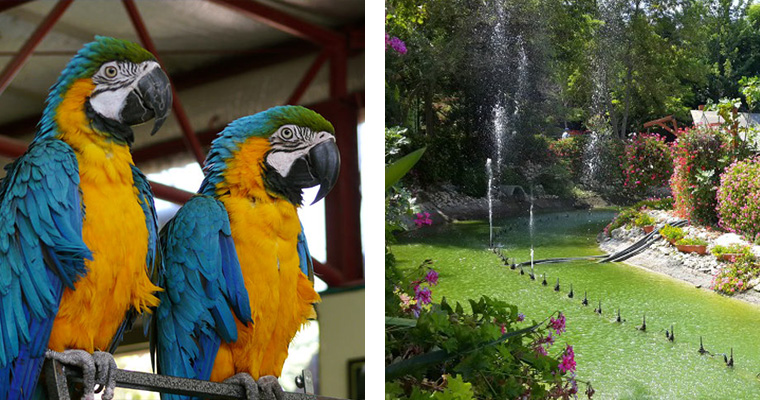 Israel remains steadfast in its commitment to conservation and protection of both the environment and the species living in it.

The Israel Nature and Parks Authority (INPA) has been given the chance to showcase a photo exhibition at the UN headquarters in New York, reflecting its own efforts to protect endangered species, maintain the landscape, preserve water, and much more.

As wildlife organizations continue to mount greater efforts to educate the public about conservation and animal welfare, education remains key to stirring up the excitement and interest of the young, which will often turn into the passion and activism needed, when they are older.

Over the last few years, Dan Hotels has developed and expanded its Danyland project to inspire and arouse children’s interest in their environment, bringing together theater, games, art and costumes with nature and wildlife to teach them about science and the environment.

It is hoped that projects, such as these, will play a small part in keeping that next generation looking forwards, will keep their parents visiting Israel and will keep biologists, like Jeff Corwin, continuing to love the unknown.