Explore Waddesdon Manor, a beautiful French Renaissance-style château in UK managed by the Rothschilds – with many Zionist connections.

The Rothschilds need little introduction. In the 18th century, the sons of Mayer Amschel Rothschild founded banking houses in London, Paris, Naples, Vienna and Frankfurt. Their prowess in banking, the arts and wine-making was matched by their philanthropy for Jewish causes.

The support of the Rothschilds was key to the success of the 19th century Zionist enterprise in Palestine, where their agricultural projects included vineyards in Zichron Yaakov and Rishon Lezion. In 1924, Edmond and James de Rothschild founded PJCA – the Palestine Jewish Colonisation Association, which eventually became part of the JNF (Jewish National Fund).

Situated not far from London in the Buckinghamshire countryside, Waddesdon Manor (waddesdon.org.uk) is one of the few remaining Rothschild grand houses open to the public. First built in 1874 by Ferdinand de Rothschild from the Austrian branch of the family, Waddesdon passed to the present Lord Jacob Rothschild in 1988. Each day, over a thousand visitors enjoy the impressive collection of art, the aviary, and the magnificent grounds.

The surprising and unique Zionist dimension to Waddesdon is that 83-year-old Lord Jacob Rothschild is also president of Yad Hanadiv, the Rothschild charitable foundation that has donated over a billion dollars to educational, cultural and environmental projects in Israel. “Hanadiv” (the benefactor) refers to Lord Edmond de Rothschild.

Mounted on a block of Jerusalem stone in the James and Dorothy de Rothschild Room, you will find scale models of major Yad Hanadiv projects: the Knesset, Israel’s parliament building; Israel’s Supreme Court building; and the National Library of Israel, a huge project currently under construction in Jerusalem. The room also contains correspondence between Dorothy de Rothschild and Israel’s prime minister David Ben Gurion relating to the construction of the Knesset and the Supreme Court.

Dorothy was a fierce Zionist who helped Dr Chaim Weizmann, the Russian chemist who would become Israel’s first president, gain access to British government circles. This access culminated in the Balfour Declaration, the letter from Foreign Secretary Arthur Balfour to Lord Walter Rothschild on 2 November 1917, promising to establish a Jewish state in Palestine. A copy of the famous letter is on display, as well as a set of intricate embroideries made of untarnished gold and silver thread. Created for a private Italian synagogue, and purchased by the Rothschild Foundation, the embroideries depict scenes from the First and Second Temples in Jerusalem as envisaged by the 18th century artist. 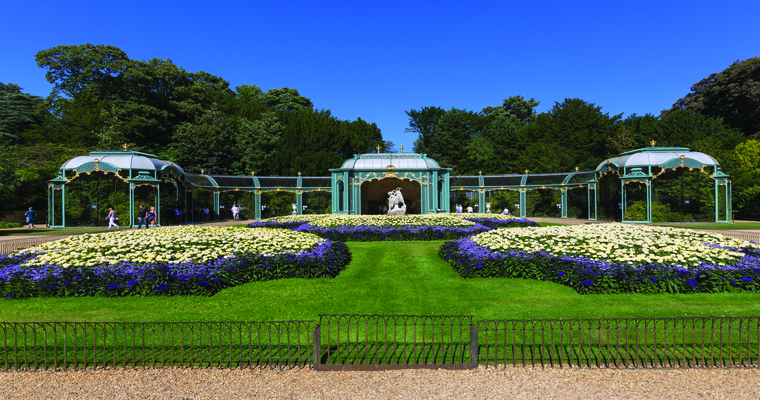 Each day, over a thousand visitors enjoy the impressive collection of art, the aviary, and the magnificent grounds. (Photo by: Chris Lacey)

The Waddesdon gift shop offers a selection of famous Rothschild wine labels, including kosher Rothschild wines. A perfect way to end your trip to this unexpected Zionist gem tucked away in the Buckingham countryside.

Yanky Fachler (yankyfachler@gmail.com) is a writer on modern Jewish and Zionist history, and is chair of the Jewish Historical Society of Ireland.