The Israel Aquarium in Jerusalem

On your next visit to Jerusalem, don’t miss the hottest new tourist experience – a visit to the Israel Aquarium, next to the Jerusalem Biblical Zoo.  The Aquarium, established by the zoo, recently opened after four years of building and an investment of one hundred million shekels.

At the spectacular facility, you can join a fascinating tour that will take you on an adventure through the marine habitats surrounding Israel. It’s hard to imagine just how diverse and rich these habitats are, as well as how much conservation and protection they require. The Aquarium’s mission is to expose us to the beauty and the complexity of sea creatures and their habitats and to recruit visitors as partners in conserving these fragile habitats. The Aquarium is entirely dark, quiet, and calm and creates an experience disconnected from the outside environment, quite like deep-sea diving.

The zoological collection at the Aquarium emphasizes the Israeli marine environment. It focuses mainly on the Mediterranean and the Red Sea, with some information about the Sea of Galilee and the Dead Sea.
The exploration path at the Aquarium includes 33 tanks of varying sizes, which present a range of marine environments. The tanks are filled with seawater produced on site. The annual cost of sea salt needed for this is tens of thousands of dollars.

From the Mediterranean to the Red Sea
The first gallery is the Four Seas of Israel Gallery, where you can see a representation of the four seas of Israel – spectacular lionfish surrounded by Red Sea coral; sea bream from the Mediterranean in an exhibit designed like the sunken ancient port of Ceasarea; tilapia in the Sea of Galilee exhibit, the only tank at the Aquarium with fresh water; and a dry exhibit which describes the Dead Sea region with its ecological challenges.

From there, the path continues to the Sherover Discovery Gallery. There, you can see unique creatures, enjoyable to observe for both young and old. These include pot-bellied sea horses, stingrays in the open pool, frogfish, stonefish, electric eels, and moray eels. This gallery also emphasizes the man-made changes to the seas, such as desalination facilities and oil drilling rigs, which create an ecological niche attracting various fish. 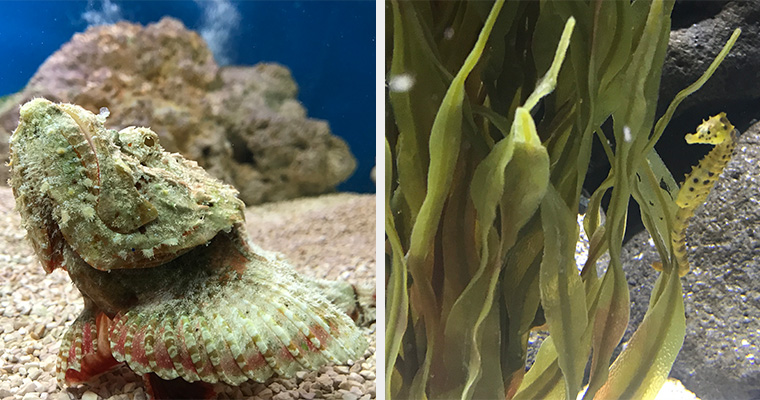 Visitors continue down the path to the “Diving Back into the Mediterranean” Gallery where they can see exhibits related to overfishing, learn about being savvy and sustainable consumers of fish so as not to harm our marine environment. Visitors arrive at the depths of the Mediterranean through a spectacular underwater tunnel, where they meet Lolita, the sand tiger shark, swimming throughout the giant tank containing 1.6 million liters of seawater. The dimensions of the tank are impressive – twelve meters deep, sixteen meters wide, and six meters high. The concave window at the front of the tank weighs seventeen tons! In this large space, visitors can take a seat and relax, gazing into the depths and enjoying the quiet, the dark, and the unique atmosphere.

From there, the path continues to the First Red Sea Gallery, with a video along the way, illustrating the migration of fish and other creatures of the Red Sea to the Mediterranean through the Suez Canal and the problems caused by these invasive species. The First Red Sea Gallery contains a beautiful exhibit with hundreds of clownfish, just like Nemo. This is also a photo opportunity- to take your photo with the fish via a glass tunnel inside the tank. Then, on to starfish and jellyfish in amazing shapes and colors. The Second Red Sea Gallery contains a large exhibit 21 meters long with colorful and diverse creatures; followed by some smaller exhibits containing sharks, lobsters and finally, a large and impressive collection of shells.

Nature conservation programs
The Aquarium was established with donations from within Israel and abroad. The Gottesman family of New York provided the lead gift, with many others joining the project. Along with a large financial investment by the zoo, all the partners came together in building this unique site, which is becoming a major attraction for the city of Jerusalem.

The Israel Aquarium was established to raise public awareness about conserving marine environments in Israel. Its main purpose is to educate, teach, and facilitate research activity and nature conservation programs.
The establishment of the Aquarium was one of the recommendations of Israel’s National Biodiversity Plan authored by leading ecologists who recommended the establishment of a national aquarium to highlight the urgency and importance of conserving our marine habitats.

Michael (Micki) Federmann and the Dan Hotels chain have joined these efforts, contributing toward the establishment of the Education Center at the Israel Aquarium. There is no doubt that the Aquarium offers wonderful opportunities for learning about how we can save our seas and oceans.

The Aquarium’s impressive building combines clean lines and a view of the surrounding Jerusalem hills.
Despite its height, the Aquarium does not stand out – it is sunken and slanted to mesh into the topography and is covered with natural stone. The roof is covered with greenery, which, beyond its aesthetic value, also helps to naturally cool the building. In the future, the roof will also be outfitted with solar panels to produce part of the electricity consumed by the facility. The sprawling structure spans an area of 7,000 square meters. Half of the area is used for the life support systems, and veterinary treatment for the zoological collection.
Strategically placed windows allow visitors to peek at the systems behind the scenes. 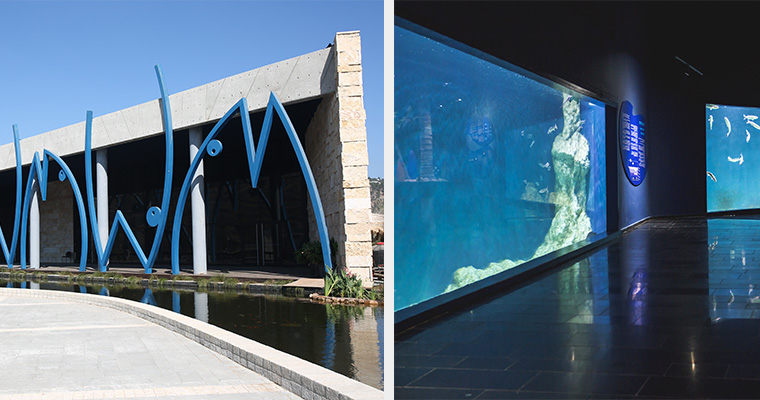 The Aquarium’s impressive building, from outside and inside

The Aquarium is currently operating on a preview basis. The team is constantly working to increase the range of fish and sea creatures, stabilizing the systems and maintenance of the spectacular facility, all while ensuring the welfare of the animals. Admission is currently only as part of 90-minute guided preview tours. Most tours are given in Hebrew, and there are also tours in English and Arabic. Check our website to stay tuned for updates.

For tickets, visit www.israel-aquarium.org.il/english and reserve spots by guided tour time slots offered. Admission is charged per person from age three and above.

Another recommended attraction: White Nights exhibit at the Zoo
The Biblical Zoo spans an area of 250 dunams and focuses on conservation, breeding, and reintroduction of endangered species to the wild. The Zoo has a variety of animals mentioned in the Bible, as well as endangered species from around the world, presented in open and spacious exhibits that mimic the natural habitats of the animals.

The zoo recently opened its White Nights exhibit, with animals that are active in the dark. Within the exhibit, the day turns into night and night into day.

During the day, the exhibit is darkened and lit by simulated moonlight, when these animals are active. At night, the exhibit is filled with daylight, thanks to special lighting, so that these nocturnal animals doze off to sleep in their secret places while visitors are absent. 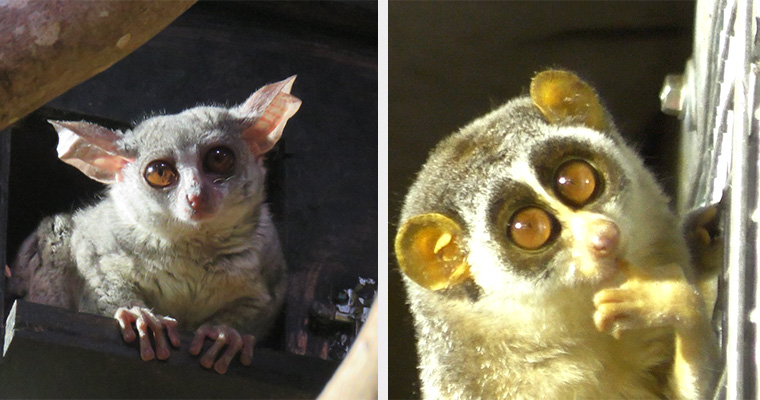 Who are these new residents?
Unique animals were gathered from around the world for the exhibit – giant cloud rats, galagos (lesser bushbaby), and the slow loris. These latter two species are small primates. Their appearance limits them to night activity. Their ears and eyes are large and prominent, and they are suited for movement, finding food, and protection from predators at night. Their neighbors at the exhibit are barn owls. These are impressive nocturnal predators that came to the zoo injured from the wild. Because their injuries prevent them from being able to return to the wild, they have found a warm home at the zoo.

There is no doubt that the most amazing creatures at the exhibit are the vampire bats. And if you’re asking yourself if such an animal actually exists, the answer is yes! The vampire bat is a small flying mammal which eats only blood. At the zoo, cow’s blood is especially acquired, and each vampire bat consumes 20 milliliters of blood each day. In recent months, our team was happy to discover that a new bat was born at the exhibit, and today the Biblical Zoo can boast being the home of the first Jerusalem-born vampire bat.