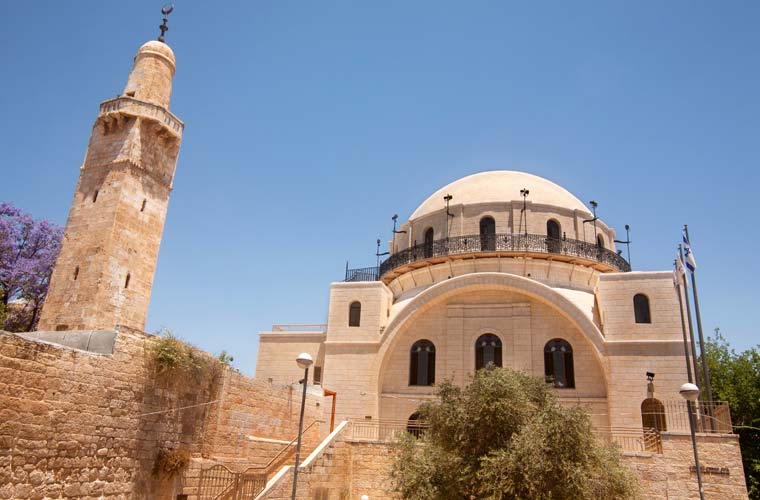 Jerusalem’s Old City is so charming you may be tempted to just walk around and see where you end up. On a family trip with kids, it’s fun to let each child determine which way to turn at every junction and enjoy the hidden alleys and beautiful homes of the Old City. I have done this with my children when we had time on our hands and wanted to get a feel for daily life in this special section of Jerusalem.

But there are also a lot of important historical sites to see in the small radius of the Jewish Quarter. Since the area has had an almost continual Jewish presence since the eighth century BCE, houses of prayer were a ubiquitous feature of the quarter. Despite wars, earthquakes and looting, many of the synagogues can be visited today.

Take a look at our available rooms in Jerusalem

The oldest surviving synagogue in the Jewish Quarter is the Karaite synagogue, founded in the Crusader period by the founder of the Karaite sect, Anan ben David. You can’t enter the synagogue, but you can view it through a window in the adjacent museum. The museum is open by appointment only which can be coordinated by phone. 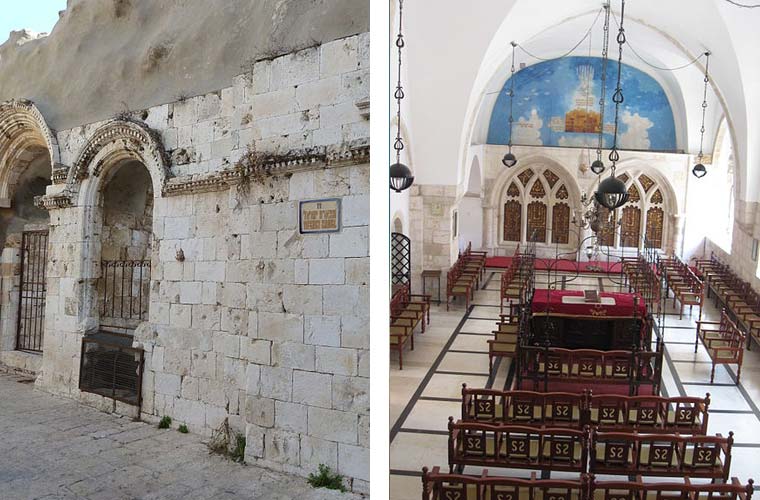 The Ramban Synagogue is the most ancient Rabbinic synagogue in the Jewish Quarter. It was built on Romanesque and Byzantine capitals, attesting to its age. Ramban (Nahmanides) was a great Jewish scholar who was exiled from Aragon and landed in the Holy Land in 1267. Although not historically proven, legend attributes the founding of the synagogue to this sage. The building was destroyed in 1948 by the Arab Legion after the Jewish Quarter fell to Jordan in the War of Independence and was rebuilt entirely after the Six Day War. Many of the Jewish Quarter’s residents pray regularly at this synagogue and it’s a good place to go for Shabbat morning services.

Above the Ramban Synagogue is the famous Hurva Synagogue. For years, the Hurva was a distinctive arch in the central plaza of the Jewish Quarter, but since the Israeli government reconstructed it in 2010, it is a large domed synagogue looking out over the Old City. The synagogue was founded in the early 18th century but destroyed by the Muslims in 1721. It lay in ruins for 140 years, thus earning the nickname Hurva (meaning “ruin”) and was rebuilt in 1864. It was the quarter’s chief Ashkenazic synagogue until 1948, when it was deliberately destroyed by the Arab Legion. There is an entry fee except during prayer times. I took my children to the Hurva for Shabbat morning prayers but found that the uncomfortable height of the women’s section and the unfamiliar cantorial prayer services were not conducive to displaying the beauty of the building. It’s best to go on a weekday and join a guided tour.

Tiferet Yisrael Synagogue was an important synagogue in the Jewish Quarter in the 19th and 20th centuries but was also destroyed by the Arab armies during the War of Independence. The synagogue is currently in ruins but reconstruction has just begun. The area has been boarded off for safety during construction, so there is not much to see there right now.

The Four Sephardic Synagogues are not related to each other except in proximity. They are attached and housed in one building, accessible from the main parking lot of the Jewish Quarter. The Yochanan ben Zakkai Synagogue was built in the 17th century and is located below street level. Scholars disagree whether it was built that way for security reasons or in deference to Muslim dhimmi laws or whether the street was simply lower at the time. The Istanbuli Synagogue is the largest of the four synagogues and was frequented by immigrants from Turkey. The most impressive part of this synagogue is its ornate outer door. It’s easy to miss if you come in through the Yochanan ben Zakkai Synagogue, so be sure to ask to see it. The Eliyahu HaNavi Synagogue was mainly used a study hall and the Emtzai (Middle) Synagogue was originally a courtyard/women’s section which was turned into a synagogue when the community grew in the 18th century.

The Beit El Synagogue is home to a kabbalistic yeshiva and has served as the center of mystical study in Jerusalem for 250 years. It was rebuilt in 1974, seven years after the recapture of East Jerusalem by Israeli forces. Its beautiful engraved door depicts the seven gates of the Old City.

The ultimate synagogue of the Old City is of course the Western Wall. Once you have toured the synagogues of the Jewish Quarter, you will want to walk down the massive staircase to the Western Wall. No matter what time you arrive, there are always people praying or reciting psalms at the wall. Write a note to place between the cracks, say a few words of prayer or just watch the tourists and locals who are visiting the holy site. 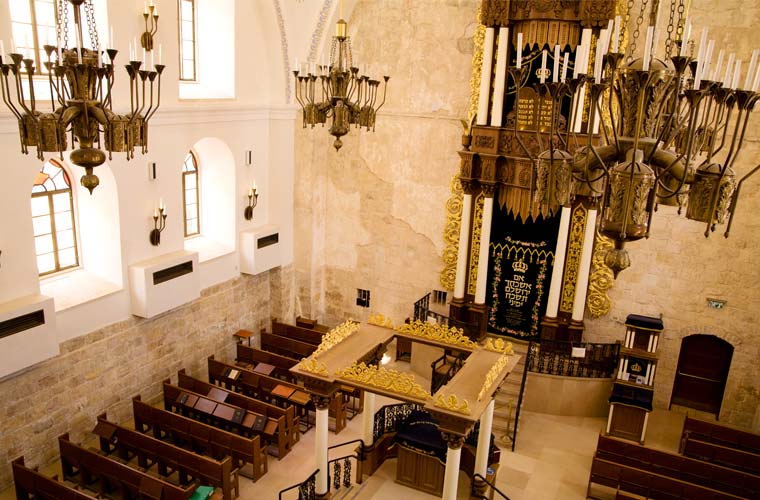